BIG NEWS about Delaware Speedway, just outside of London, Ontario. From Norm De Bono, London Free Press: “The new owners are the Delaware Group, made up of London businesspeople Walt Spivak and Jon Aarts and the United Racing Series, including Ivor Jones, John Jones, Steve Drake and Ramsay.

“Russ Urlin will continue in the role of General Manager and Darryl Timmermans the Competition Director. The United Racing Series marketing and management team will promote the facility.”

I have a soft spot for Delaware having won the very first race, a Hobby Class heat race, on the new Jack Greedy-built, half-mile track waaaaaay back in 1969. Plus I announced there, was Tech Director under Tony Novotny (just for one year – 1979) and did the program for Jack Greedy in the 1970s.

More GOOD NEWS – the CanAm Stock/Superstocks will be racing at St. Thomas Dragway on June 19 and 20 followed by Grand Bend on the following weekend June 26 and 27. BE THERE!

Hopefully more and more local tracks will open in the very near future. Everybody needs that, fans, competitors, sponsors, crew members, advertisers and track owners.

F1 was worried about ‘slow down’ qualifying in Baku. That is where a driver slows down to allow the cars ahead of him to get away so he has an open track ahead for a fast lap. The problem is that approaching cars may not realize how slow the car is going and might cause an accident.

F1 is looking for another venue after Singapore was cancelled on October 3. After watching the CARNAGE at Baku I would suggest a race in the Catacombs of Rome should be a natural.

Tire problems at Baku!! Canadian Lance Stroll had a VERY severe ‘tank slapper’ when his left rear tire blew at high speed on lap 31. And to demonstrate just how hard the track was on tires the race (and points) leader Max Verstappen crashed at 200 mph with only three laps to go!! Ouch. And then Hamilton overcooked the restart? Perez won over Vettel and Gasly. 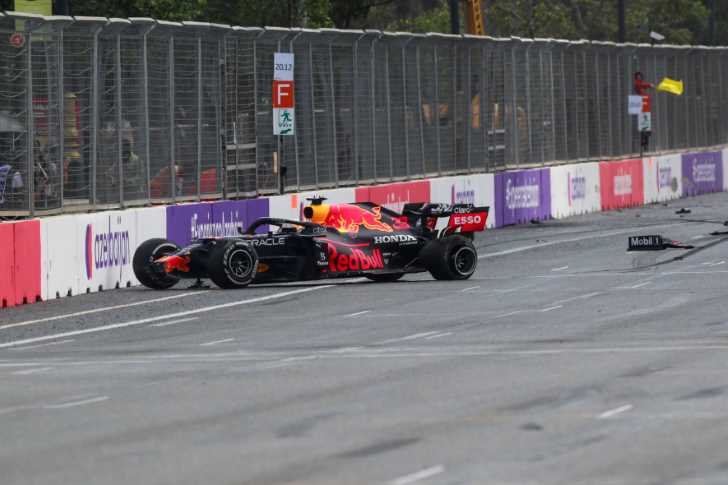 CUTLINE: Verstappen looked set to win at Baku, until his left-rear Pirelli gave out sending him for a wild ride and a DNF. Credit: Baku GP.

In IndyCar, the several spinouts on pit road during the Indy 500 were not, according to reliable sources, the fault of the drivers. In attempts to go faster the calipers are set up to hold the pads away from the rotors thus reducing drag.

But extra foot pressure is required to overcome that force to get the brakes to work. This extra effort can cause the brakes to grab and this variable resulted in the spin-outs we all saw.

Six International Speedway Corporation (NASCAR) owned tracks have announced plans to go back to full grandstands. Michigan, Daytona, Talladega, Richmond, Martinsville and Phoenix will not have any restrictions on crowd size. Each track’s campgrounds will be wide open as well. A good move in my opinion. 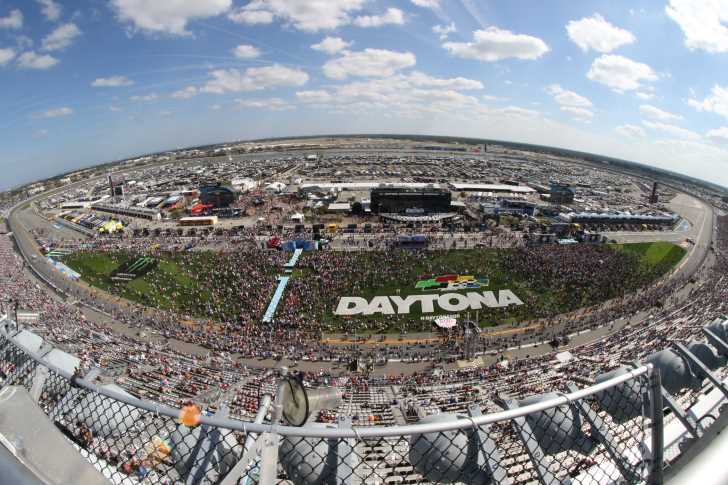 NASCAR visited the wonderful California Wine Country and put on a great show at Sonoma. Everybody was wondering before the race if Hendrick Motorsports could get four in a row. And the answer is – YES. Larson over Elliott.

A lot of damaged race cars heading home after that very exciting race. Here’s a question: is NASCAR too quick with the full course yellow flags on road courses? I feel that local yellows could speed up the race. 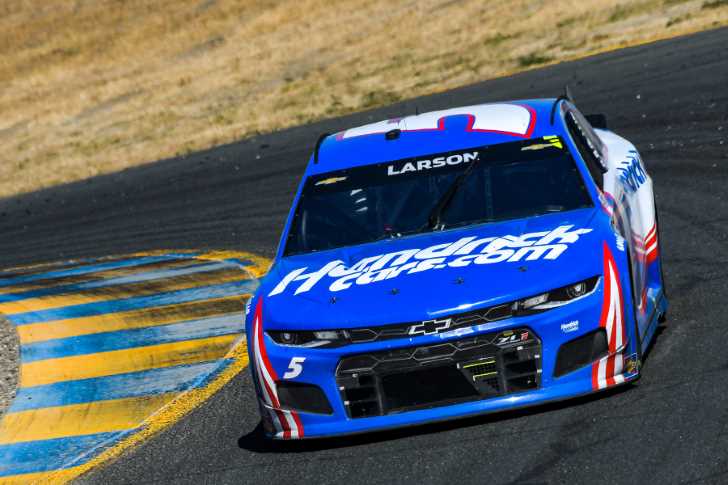 CUTLINE: Kyle Larson, who spent most of last season out of the Cup Series, is now the hottest driver on the circuit. Credit Sonoma Raceway.

As well the Xfinity Series put on a very ‘interesting’ race at the beautiful Mid-Ohio Sports Car Course. Interesting due to some wild action on track and some severely complex rules regarding pit stops.

Cars could get either tires or fuel but not both thus requiring two stops. Don’t ask!! Alex Labbe had a good race running near the front until he ran into a bit of trouble. A.J. Allmendinger put on a clinic winning the race after coming from nineteenth on the last restart.

And finally, if your local racetrack has a big race upcoming let me know and I will be happy to mention it in an upcoming blog. motionman@rogers.com.