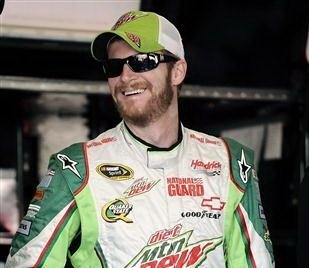 KERRY THARP: We’re here with Dale Earnhardt, Jr., driver of the No. 88 Diet Mountain Dew National Guard Chevrolet for Hendrick Motorsports, and Dale, first thing I’m going to ask you, you’ve won the Daytona 500, you know what it’s like to go to victory lane here at Daytona. What would it be like to go into victory lane here at Daytona again in 2012?

DALE EARNHARDT, JR.: Winning the 500 is the biggest race of the year. It’s the greatest feeling. When it comes to winning single events, you can’t beat it. A lot of effort goes into this race. Just like down here testing for three days, we don’t really do it anywhere else. Same amount of work that you’re seeing down here for three days, that’s what’s happening back at the shop with the engines for this race, for that whole Speed Weeks. The effort is quadruple when it comes to how much goes into the engines just for that race and the bodies on the cars just for that race.

A lot goes into it for whatever reason, more than any other event. So it’s a pretty big deal when you win.

Q. Just a simple question: What’s your mindset entering the season? How did the off season go as far as you thinking about this season and what’s your approach going to be?

DALE EARNHARDT, JR.: The off season has been good. I’ve been able to relax a lot, and I’ve been looking forward to getting in the car. I really wasn’t ready to get out of the car, and I’ve been asking Steve when we were going to test, when we’re going to go to the racetrack just to be doing something instead of sitting around at home. We plan to test a little bit more than we did last year before the season starts, which I think will be good for our team.

It’s been good, though. I’ve been just enjoying the time off and really getting charged up and ready for the year to start.

Q. What’s your thoughts on the speed y’all are running out there now? Do you think it’ll be faster, slower? Do you like it better than last year?

DALE EARNHARDT, JR.: Yeah, I like going faster than we’ve been going. The cars are really, really slow by themselves the last couple years at Daytona and Talladega. Qualifying in the mid 180 range is just way too slow. You know, when I was growing up as a kid, hearing the numbers that guys were trying to put up and how fast they would go, 210 here and 214 at Talladega when Elliott was doing that in ’85, maybe it was ’84, but just back then those kind of numbers, man, that was awesome stuff to read about, and it gets you really excited.

So going 30 miles an hour slower than that doesn’t sound like a lot of fun, and it’s not. So I’m glad that they opened up the cars a little bit, took a little plate away, took a little spoiler away and gave us a bigger plate.

I could always the cars, the track is brand new, and the tire is really good, so the cars don’t handle. I like the cars to handle some. I’d like to have to adjust on my car and work on the handling and get it to drive good, but it doesn’t go fast enough to have a problem. So that’s a little disappointment.

But I think that the changes they made are really good. I can feel that I’m going around the corner faster than I have been the last couple years, which is good.

DALE EARNHARDT, JR.: I’ve only run single car runs today, so I don’t really know how to answer that question. If I had to guess, I’d guess it’s going to look like last year’s race.

Q. I was just curious your thoughts about what kind of impact the stories we’ve seen about limiting communications between drivers on the track might make.

Q. Do you have any changes at all really with your team this year, and if not, can you just talk about kind of the difference going into this year compared to last year?

DALE EARNHARDT, JR.: We had a couple people move around. I had a really, really good interior guy that went to work at RCR because it’s a little closer to where he lives. A lot, actually. And we got a new guy who works out really good.

A couple other positions like that, similar to that, that can really affect a team. Everybody’s personalities have to mesh and everybody has to get along good. You get one guy in there that everybody doesn’t like, then you’ve got a big problem, kind of a bruise over the entire season and can really bring a team down from the inside out.

But I feel pretty good about the changes we’ve made. I believe in what Steve chooses when it comes to personnel, to put the team around him that he thinks he needs. So I’m excited about some of those changes that we’ve made.

But other than that, we have nothing really huge that’s been done. I think they did hire a fellow to come in and manage the fabrication department or something like that, which is a pretty big deal, but the effects of that won’t be felt for another month or so.

Q. When Danica came here in ’09 for the ARCA test she talked about how nervous she was and had trouble figuring out how to put her hair in the uniform and things like that. Did you pay any attention to her today? Did you feel like this is routine stuff for her, that she’s kind of gotten past all that?

DALE EARNHARDT, JR.: I didn’t even remember that she was supposed to be here. I didn’t know who was in the 10 car until Steve told me because I saw 10 on the board, and I’m thinking, There’s no 10; who’s in the 10? But she’s been relatively quiet, and that’s probably good for her to be able to come in here and work and get everything done she wants to get done and concentrate on her driving and concentrate on her new team and everybody. She’s learning a whole new group of guys, and the nuances of the Cup car versus the Nationwide car. As far as I can tell it’s been a pretty quiet day, considering.

Q. Just wanted to ask you about Cole Whitt in your Nationwide car, about that deal.

Q. Tell me how you came to pick him over the other drivers who are out there and what you think he brings to your team.

DALE EARNHARDT, JR.: Well, I thought that, no disrespect to any of the guys that we didn’t choose, they know who they are, but we considered a lot of different people. I just felt like Cole had some potential that was untapped, that we hadn’t he had potential and ability that we hadn’t been able to he hadn’t even discovered yet, and I feel like in the guys that we looked at, we sort of know what kind of hand and cars they had and what kind of talent they had and where they would take us.

And I think it’s more exciting, a lot more risky but more exciting to go with a guy who you don’t really know what he’s capable of and could be big things, but you’ve just got to take that risk. And that’s really why I do it. I don’t do it to make money. I don’t have a whole lot of other reasons to be in the Nationwide Series other than just to help somebody. When I’m able to do that I enjoy seeing what happened to Brad and seeing Eric get a deal like he’s got now. That’s why I do it, you know.

It’s funner to help the new guy than it is to help the guy that’s kind of been through the ringer a few times. Everybody deserves their opportunity, and I just feel like that was going to be Cole’s only shot.

Q. You had watched Keselowski and seen him on the track and kind of had him on the radar screen. Did you have that same kind of interest with Cole because this really came together very quickly with Eric leaving. Was he somebody that you said, my goodness, if we could give this kid a shot somewhere down the road because you also have Josh under roof, too.

DALE EARNHARDT, JR.: Well, Josh did a good job for us. I didn’t really watch Cole like I did Brad. I knew Brad before I even thought about hiring him as a driver. I just knew him, knew his family and stuff and would see him and watch him drive and watch him do stuff.

And he impressed me, but I didn’t have the opportunity to sort of I didn’t have the opportunity to watch Cole. The only time I really got to see Cole race was at Phoenix in the Cup car when I was out on the track with him. I never watched any of his truck races, never seen him drive before then. But everybody who works in that garage in there that has my phone number called me and told me Cole was the guy. Every one of them. People I don’t even talk to, people that I don’t really have relationships with took time out of their day to call me and say, that’s the guy you need to hire. They had no other other than interest in seeing Cole do well and get an opportunity. I thought it said a lot for people to do that.

And the ones that I reached out to, that was the first guy on their list. I trusted all these people, and I feel like the guy from what I can tell, what I can see, that he deserves an opportunity. This might be his only opportunity, so I wanted to be the one to give it to him.

Q. How did your ’70s themed New Year’s Eve party go, and who did you end up dressing up as?

DALE EARNHARDT, JR.: I’m glad you asked. I was Evel Knievel, of course. Has Matt Kenseth been in here today? Is he coming in?

KERRY THARP: He’s coming in in about 30 minutes.

DALE EARNHARDT, JR.: Y’all can remind him that he owes me $2,500 because he had a beard that night and I bet him he couldn’t keep it through the test, and we actually sent a few texts back and forth to confirm the bet, and he shaved his beard. You guys can remind him I told him to go to the bank, but maybe he forgot. I want my $2,500.