BOWMANVILLE, ON – Despite a wide variety of attractions available to the fans of the Canadian Tire Motorsport Park Speedway, the two dates that remain perennial favourites are the Fan Appreciation Nights, when the Speedway faithful can get up close and personal with their chosen drivers and get a firsthand look at the racing machinery.

Last Saturday night, Red Beard’s Sports presented the first (of two) Fan Appreciation Nights at the Bowmanville-area venue, while Waste Management Services once again this year stepped up to provide and promote the on track activity featuring the Lucas Oil Pure Stocks, the Bob’s Towing Thunder Cars, the Late Models and the Techtonix Open-Wheeled Modified Series. 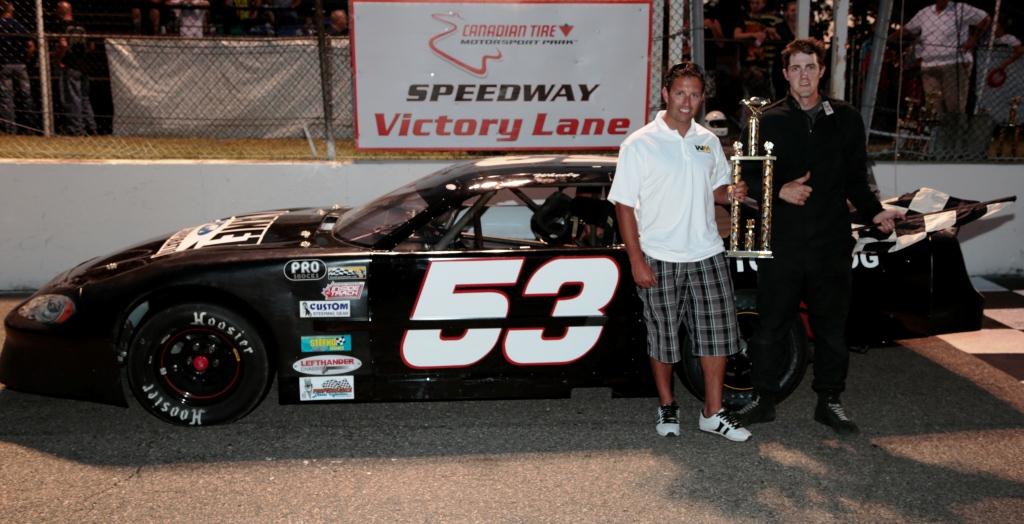 It appears that Kyle Donaldson has found his stride.

Last Saturday, ‘Wheely’ completed his second consecutive sweep of the Late Model contests, claiming both of the evening’s qualifying heat sprints, and then piloting his #53 Downtown Rug/ Custom Steering Impala into the Winner’s Circle in the 20-lap division feature.

But it must be stated that his fellow podium finishers did not make it easy for him.

Forming a high-speed, three-car breakaway, the trio circled the Speedway bumper-to-bumper with Donaldson slipping low past Kearnan in Turn Three on the fourth lap to slide into the runner-up spot. Four circuits later, Gordon and Donaldson were running virtually side-by-side, and five laps later, Donaldson was finally able to complete the pass, taking advantage of lapped traffic to wrestle the point away from the former Challenger class champion.

Once alone at the head of the train, Donaldson edged away, powering to the checkered flag three car lengths in front of the Gordon/ Kearnan tandem.

“The lapped traffic came into play, it was just the break I needed,” said Donaldson. “I thought I had Mark a couple of times, but he had just enough so that I couldn’t clear him.”

Conceded Gordon, “It wasn’t for lack of trying. But we had some issues in the second heat, so we’ll be satisfied for second place.”

Shannon Kimmerly endured a race long battle with the #37 Dodge of Craig Perry to secure a fourth place result, with Perry and Richard Boake (#90) rounding out the lead lap finishers. 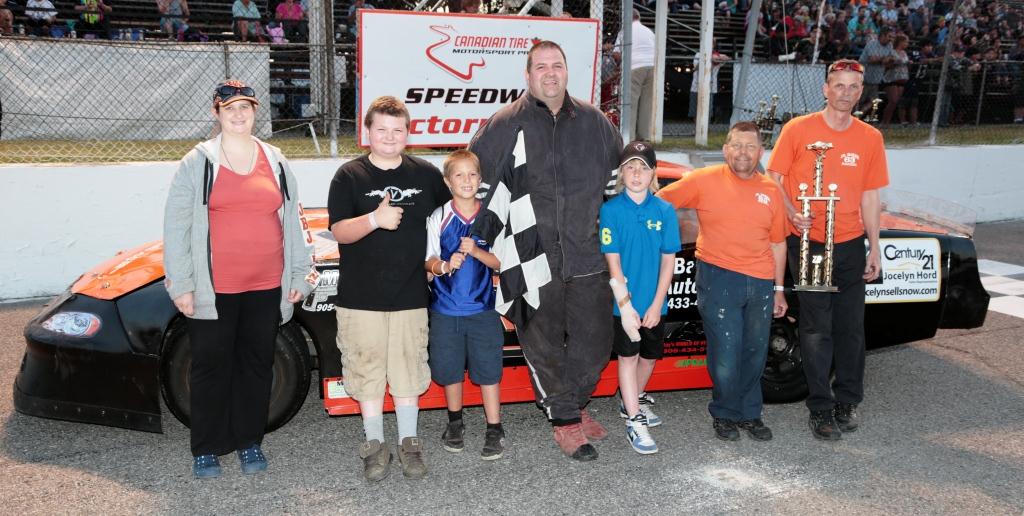 John Baker Jr. faced some fresh opposition in a familiar car last weekend, as ‘Flyin’ Ryan Kimball stepped into the seat of Chad Strawn’s #77 Mold Tech/ Bourque Transmission Monte Carlo. But in the end, it was a recognizable result on the Bob’s Towing Thunder Car scoring sheets.

Starting from the inside of Row Three, Baker’s #63 Fotheringham Bookkeeping/ Baker’s Auto Chevy set of in search of the race leading #77, advancing one position per lap until the fifth tour around the Speedway half-mile. Utilizing the wide line around turns Three and Four, Baker edged his mount past Kimball as the pair charged down the front straight, grabbing the lead as they entered the first corner.

With a clear track in front of him, Baker pulled away, eventually capturing the checkered flag and completing his second Hat Trick of the season.

“We’ve been working our butts off on this car. We keep tweaking the setup and everything we’ve tried seems to work. It’s all the hard work by the crew that has been our secret to success this year,” said Baker.

In one of the closest battles of the night, Steve Mayhew (#14 Mayhew Graphics Nova) held off the #10 Chevy of Dale Wood by less than a car length to claim a hard-won third place, with Tom Cormier’s #2 Monte Carlo completing the top five finishers. 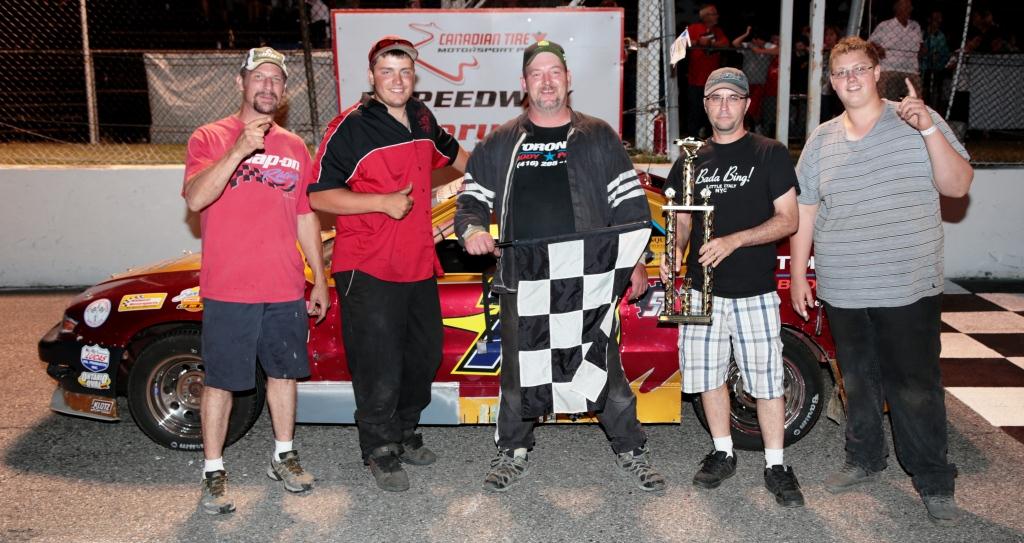 Corey Hayward is not about to let Lucas Oil Pure Stocks points leader Willy Howells have an easy stroll to the class championship. As the 2012 campaign heads towards the mid-point of the season, Hayward trails Howell by 23 points, but narrowed that gap on Saturday night, as the driver of the #70 Algonquin Property Services/ Truxmart Prelude swept to victory in all three of his race appearances, grabbing the checkered flag in both of his heats, and then holding off the charging #54 of Kevin VandeBeek in the 20-lap feature.

Opening a solid lead with a quick jump at the drop of the green, Hayward watched his mirrors as Henk Mulders (#45 Link Greenhouses/ Vos’ Independent Acura), VandeBeek, Howells and Jeff VandeBelt (#33 Attention to Detail Integra) began a back-and–forth scrap for the runner-up position.

Breaking free of the four-car pack, VandeBeek set his sights on the quickly disappearing back bumper of Hayward’s Honda, but his challenge fell a car length shy as Hayward claimed his fourth feature victory of the year.

“Racing this hard is tiring, but winning never gets tired,” laughed Hayward. “This win feels just as sweet as the others.”

Not able to distance himself from his class rivals, Howells settled for third place, the #19 Durham Corporate Place/ Roughley’s Insurance Prelude crossing the stripe a car length in front of the bumper-to-bumper duo of Mulders and VandeBelt. 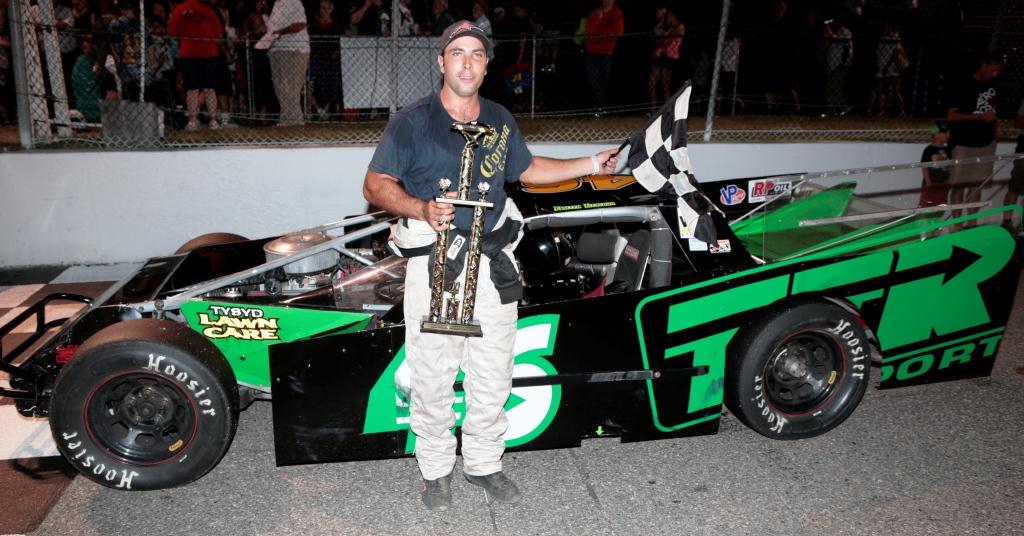 For nearly a decade, Dwight Brown and Darren Kearnan have gone head-to-head in the Speedway’s Modified division, the two drivers sharing in six track championships.

The rivalry has been renewed this year in the Techtonix Open Wheeled Modified Series, and last Saturday the two past champions were once again dicing wheel-to-wheel for race supremacy.

Splitting the wins in the twin, 10-lap heat races, Brown and Kearnan lined up side-by-side on Row Four for the 20-lap feature. Locked in a four-car pack with Josh Gruntz (#31) and Rob Warnes (#95), the foursome could only steal a glance at the disappearing rear nerf bar of race leader Craig Stevenson (#Y77). Up to speed and narrowing Stevenson’s advantage, as the train took the crossed flags on lap 10, Kearnan was finally able to take the long, outside route around the third corner, his #46 TTR Transport Modified moving into the race lead with Brown wrestling the runner-up spot away from Gruntz one tour later.

With a new power plant under his hood, Kearnan was able to stretch his advantage slightly, taking the victory by four car lengths from the familiar #2 Bourque Transmission car of Brown.

“I never thought I’d make it to the front,” admitted Kearnan. “Once I got clear everything seemed okay, but I ran out of front brakes. I had a bit of room to play with so I figured I could hold Dwight off as long as I didn’t mess up too badly.”

Said Brown, “I knew whoever got clear first would win this. I got balked a little and that let Darren get the advantage. I have to admit, I prefer looking at him in my mirrors, rather than at his back bumper.”

Gruntz was the best of the rest, earning a third place result and taking the checkered flag two car lengths in front of the #95 of Rob Warnes. Series newcomer Stevenson was next to the stripe, claiming a top five finish, and leading Rick Warnes, Bill Pickford and Brian Strawn to the line in a four-car, nose-to-tail train.

Cathcart Prepared And Hopeful For CTMP