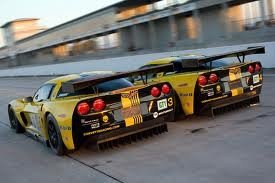 DETROIT, Jan. 20, 2012 – A new alignment of drivers will pilot Corvette Racing’s new Compuware Corvette C6.R race cars when they make their competition debut at the season-opening 60th Anniversary Mobil 1 Twelve Hours of Sebring. With additional testing following the announcement of the 2012 driver roster, the team has now finalized the lineups for the twin Corvettes.

“As part of our comprehensive review of Corvette Racing, we considered every element of the program, from the chassis and engine to the driver pairings,” said GM Racing Director Mark Kent. “Preseason testing and data analysis suggested that a revised driver alignment could improve the team’s overall performance. Certainly physical size is a factor in minimizing the time required for driver changes during pit stops, but we also evaluated the drivers’ individual styles and their preferences on chassis setups. With these pairings, we can minimize compromises and maximize driver confidence.

“This new alignment also combines experienced and younger drivers,” Kent added. “We expect the veteran drivers to mentor the younger drivers, accelerating the process of learning and development.”

This new driver alignment sees Magnussen, 38, return to the No. 3 Corvette C6.R that he drove from March 2007 to August 2010. The Dane will co-drive with Garcia, 31, who moves from the third-driver role he began in 2009 to a full-season campaign in the American Le Mans Series and the 24 Hours of Le Mans. The team’s newest member, Jordan Taylor, a 20-year-old from Apopka, Fla., joins Magnussen and Garcia as the third driver in the No. 3 Corvette C6.R.

Corvette Racing will introduce its new driver lineup at the Sebring Winter Test on February 8-9 in preparation for the Mobil 1 Twelve Hours of Sebring on March 17.

About Chevrolet: Founded in Detroit in 1911, Chevrolet celebrates its centennial as a global automotive brand with annual sales of about 4.25 million vehicles in more than 140 countries. Chevrolet provides consumers with fuel-efficient, safe and reliable vehicles that deliver high quality, expressive design, spirited performance and value. The Chevrolet portfolio includes iconic performance cars such as Corvette and Camaro; dependable, long-lasting pickups and SUVs such as Silverado and Suburban; and award-winning passenger cars and crossovers such as Spark, Cruze, Malibu, Equinox and Traverse. Chevrolet also offers “gas-friendly to gas-free” solutions including Cruze Eco and Volt. Cruze Eco offers 42 mpg highway while Volt offers 35 miles of electric, gasoline-free driving and an additional 344 miles of extended range. Most new Chevrolet models offer OnStar safety, security and convenience technologies including OnStar Hands-Free Calling, Automatic Crash Response and Stolen Vehicle Slowdown. More information regarding Chevrolet models can be found at www.chevrolet.com.