DJ Kennington will race at Phoenix

EDSON, AB – The off-season has begun for many racing series in Canada however the race season is far from over for title sponsor of the NPP Late Model Series. Northern Provincial Pipelines Ltd. will be waving the Canadian flag south of the border at two upcoming race events.

“The dirt cars are parked for the year,” says NPP owner Dwight Kennedy, “now it’s time to bring out the pavement cars.” Sidney, British Columbia’s Darrell Midgley (below), the 2009 NPP Late Model Series Champion and St. Thomas, Ontario’s DJ Kennington (top), the two-time Canadian Tire NASCAR Series Champion (2010, 2012), will both be racing south of the border in the coming weeks. 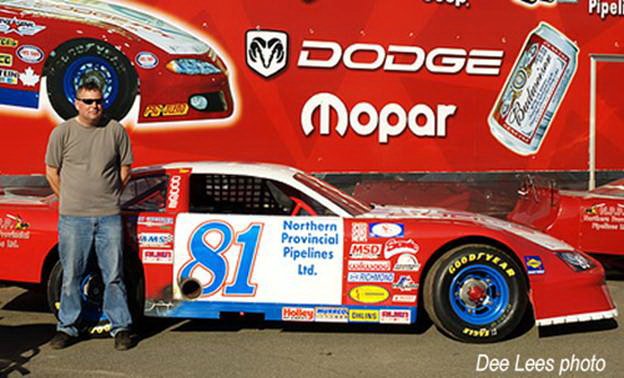 Midgley will be competing at the annual Fall Classic event on the ‘The Bullring’ at Las Vegas Motor Speedway the end of October (24th- 26th). Kennington will compete at the NASCAR K&N Series event at Phoenix International Raceway in November (7th-9th).

“For several years we’ve had cars compete in Phoenix and Vegas,” says team owner Dwight Kennedy, “it’s basically a tradition now.” This will be the sixth consecutive appearance for Midgley on the .375 mile paved oval track in Las Vegas, Nevada. “We’ve always run well and qualified well [in Vegas],” exclaims Midgley who finished 5th at the 2012 Fall Classic, “as a team we are putting a huge effort into this year’s race.” For the first time, Northern Provincial Pipelines Ltd. will be bringing two cars tothe Fall Classic event in Las Vegas. “We will be running in both the Super Late Model and the Late Model classes,” admits Midgley, “yes there will be the additional pressure of running the extra race.”

DJ Kennington will focus his efforts on the NASCAR K&N Series event in Arizona. “This will be the first time behind the wheel of a race car since Peterborough Speedway [in September].” At the season ending race of the NCATS series, Kennington finished fourth and wound up second overall in the 2013 championship point standings. Kennington finished just two points back of top spot. “Looking forward to getting back to Phoenix,” says Kennington, “we’ve had some strong runs there the past few races.”

At the NASCAR K & N Series 2013 Season opener back in March, Kennington finished seventh. “We don’t run with these guys all the time and to come out and grab a top 10 felt pretty good.”

Both Kennington and Midgley will have two separate on-track practice sessions before qualifying and their individual race events.