AUSTIN, Texas (September 22, 2022) − After a dramatic weekend at the Circuit of the Americas for the USF Juniors Presented by Cooper Tires season finale, where DEForce Racing #17 Mac Clark, arrived with a 30-point lead in the Driver Championship standings, the 18-year old from Milton, Ont., Canada, managed to clinch the title that awarded him a scholarship valued at more than $221,000 to graduate into the Cooper Tires USF2000 Championship, in 2023.

The finale weekend started with Clark topping Friday’s three test sessions and Saturday’s practice. For qualifying, Clark scored the fastest lap of the session, but was penalized after stopping on track due to a fuel pump failure, and causing a red flag. Clark started Race 1 from the back of the field and quickly made his way up to the top ten after only a few laps. Clark ended up taking the second place finish which helped his cause of extending his lead, but was still not enough to clinch the title.

It all came down to Sunday’s Race 2 and 3. Race 2 started Clark from the seventh position and he fought his way back to fourth. A penalization to Nikkita Johnson, moved Clark up to the third place of the podium.

For Race 3 all Clark needed to do was finish 16th or higher, so in a strategy move by his team he opted to move back to the tail at the start to avoid any contact and potentially risk the title. After only six laps, Clark moved into the top ten and he continued to charge forward, to finally make it to the third place finish, clinching the Championship title.

The podium celebration was made extra special with DEForce Racing #17 main sponsor, Austin-based applied science company Valkyrie, who had over 30 guests attend to support Clark’s championship. “We’re super proud of Mac and what he’s done this season. Clinching the championship at our home race, in front of many of our employees, clients and partners is very special to us,” said Charlie Burgoyne, Founder and CEO of Valkyrie. “It’s very important for Valkyrie to support young talent, and Mac being a winning driver who is also pursuing a STEM education makes him a great fit for us. We look forward to continuing to support his path to the NTT Indycar Series!”.

Throughout the 2022 USF Juniors Presented by Cooper Tires season, Clark displayed speed, consistency and domination. With 5 wins, 10 pole positions, 12 podium finishes, 4 fastest race laps, most laps led and the most races led under his belt, last Sunday September 18th, he became the first Canadian to win a Championship in the Road to Indy in 10 years.

“When we first tested Mac, we knew he was a Championship contender,” said David Martinez, DEForce Racing, co-owner. “2022 was a very memorable year for us as a team. We won races in all three series (Indy Pro 2000, USF2000 and USF Juniors), and we were able to win the first ever USF Juniors Presented by Cooper Tires Championship with Mac.” he finalized. 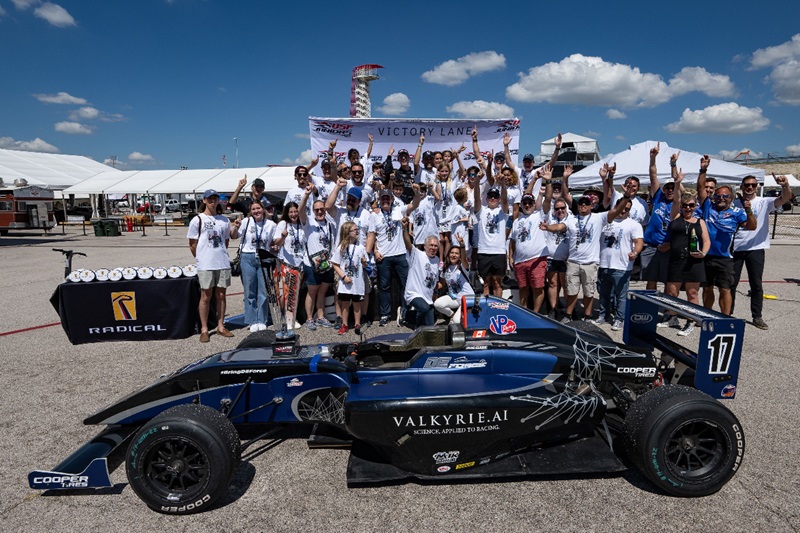 “Our goal as a team is to serve as a strong platform and provide winning opportunities for our drivers all the way to Indy Pro 2000.” said Ernesto Martinez, DEForce Racing co-owner. “We believe that Mac has the potential to get to the NTT Indycar Series and we will do everything we can to do our part in his development. Our future plans are to work together for 2023 and be able to continue our relationship together in the Cooper Tires USF2000 Championship. We are hoping to announce our full lineup by December.” Martinez concluded.

Clark, who is part of the Speed Group Driver Development Program, had a busy racing program put together for him this year which included not only the USF Juniors Championship Presented by Cooper Tires, but also the FR Championship with Future Star Racing, and his debut in a one-off race in the Cooper Tires USF2000 Championship. Clark scored wins in every championship he competed in.

“It’s great that the USF Juniors was added to the Road to Indy to help young drivers make that first leap into formula cars,” said James Hinchcliffe, partner at Speed Group. “For Mac and DEForce to take the inaugural title is incredible. Mac performed at an incredibly high level all year and we are all so excited to see what he can do in the Cooper Tires USF2000 Championship next season. He has the right approach, attitude, work ethic, and now experience, to be contending from the first race.”

“I am beyond proud of what this team has accomplished in 2022.” said Clark. “Looking back on this season, I am grateful for everyone who has made this program possible. Shoutout to DEForce Racing, Speed Group, and Valkyrie for their continued support. Thank you for being a part of our championship-winning campaign. We are excited to see what 2023 holds. In the meantime, our focus shifts to the off-season and working to be even better, strengthening our foundation of Partners so we can eventually push up to the NTT IndyCar Series.”, he finalized.

About Speed Group: Speed Group is a Motorsports company that aims to use experience and knowledge to create a better journey for clients and through this, elevate the motorsports industry. Learn more about our services and success stories at www.speed-group.us

A Message from Mac: Go to my website www.macclarkracing.com and join my MCR CLUB on the front page to keep up with my latest news.