NHRA Nitro Funny Car driver Jeff Arend has joined Frank Hawley’s Drag Racing School team as a Program Sales Representative. Jeff will be working with 18 year school veteran Paul Shields in a position for which Jeff is uniquely qualified. Jeff’s entire career has been devoted to drag racing. He has worked as a mechanic, instructor, sales rep and race car driver… a position he currently holds as driver for the “Grime Boss” NHRA Nitro Funny Car campaigned by drag race legend Jim Dunn.

Jeff Arend (right) and Frank Hawley go way back. Both natives of Ontario, Canada, Jeff and Frank grew up racing at the same drag strips in Southern Ontario and both fulfilled their childhood dreams of one day getting a shot in the “big show”, driving NHRA Nitro Funny Cars.

When Frank Hawley’s Drag Racing School opened its west coast program back in 1996 Frank needed experienced, skilled drag racing mechanics and drivers to maintain the school cars and instruct the classes. Jeff Arend was one of the first people he called. 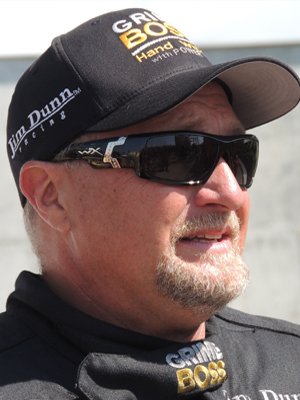 “I had known Jeff for many years and was very familiar with his skill set,” said Hawley. “I needed someone that could tune and maintain our Alcohol cars as well as instruct our drivers. Jeff could do it all,” continued Hawley. “I met with Jeff, offered him a position and he accepted.”

About the same time Jeff signed on, another “up and coming” driver came to work for the school. Current Don Schumacher Racing Funny Car driver Jack Beckman joined Jeff. “We had quite a staff,” said Hawley!

When the School’s lease at Pomona was not renewed several years ago the west coast staff continued building their own individual drag racing careers but the relationships and friendships stayed intact.

“We are enjoying a time of growth at our racing school,” said Hawley. “We have new programs we are offering and new race tracks we will be attending. Jeff will be a great asset to our team and a great help to our customers. He understands every aspect of our business and of course everything about drag racing. Jeff will be able to help answer anyone’s questions and guide them to the perfect program,” said Hawley.

“The fact that I’m currently racing a Nitro Funny Car on the NHRA Mello Yellow series is a real bonus for me and our customers. I’ll be at every major drag strip in the country this year and although I get very busy sometimes helping the crew with the car, it will provide a great opportunity for folks to stop by our pit and talk about their racing plans and how Frank Hawley’s Drag Racing School may help them achieve their goals or fulfill their dreams,” said Jeff.