@Merrittville • @LucasOil • THOROLD, ON – After kicking off their 40th Birthday Celebrations earlier in the day, Seaway Mall was celebrating again with the 2015 season’s first feature winners Saturday April 25th. 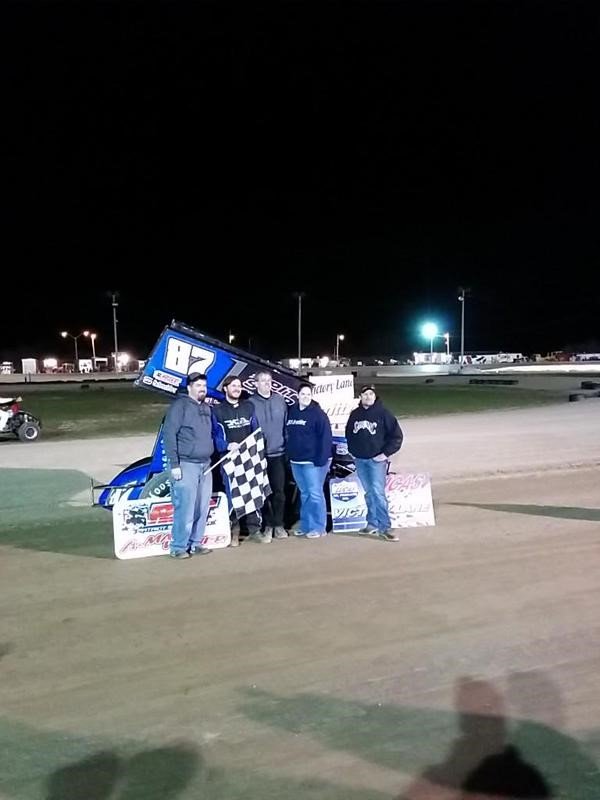 Antwerp NY’s Jeff Cook was first to lead the 25 lap A Main for the Patriot Sprint Tour but handed top spot to Jason Barney on lap 10 after drifting high off the front-stretch at the start finish line.

A lap 15 restart found Barney back out front after former Rev’s Full Throttle Powersports Modified Lite Champion Shawn Sliter spun his sprint car. By lap 20 Barney and Cook had pulled away from the field setting up a 5 lap dash to the finish through lap traffic.

While Barney was able to hold off Cook – another race to watch was for third.

An early race red flag stopped the event with just 3 laps complete when St. Catharines driver Chris Steele and Quebec’s Alain Bergeron came together between Turns 1 and 2. Both drivers were ok after the violent incident while both their cars suffered extensive damage.

“If tonight had been 36 laps it might have been a different story,” said defending Pinty’s 358 Modified Champion Mat Williamson, “I’m lucky to be here.” 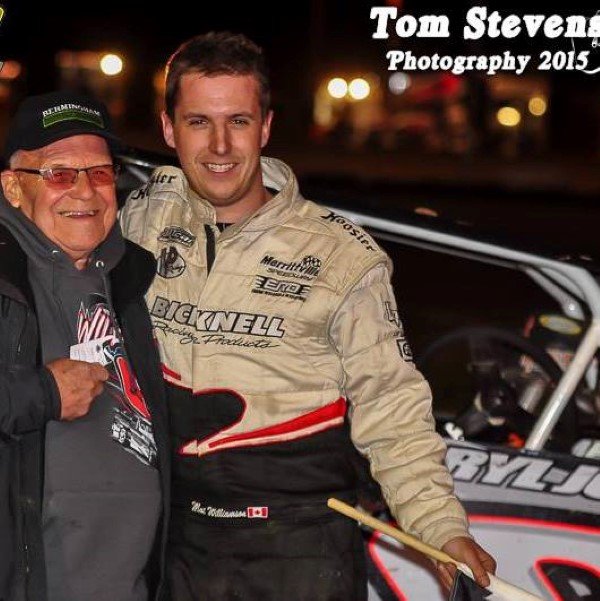 Coming up on slower cars late in the event had Chad Brachmann of Sanborn NY making a late race charge on the leader after taking over the runner up spot from second generation driver Jeff McGinnis of Ransomville NY on lap 28.

At the halfway point, Williamson had opened up as much as a half straightaway lead on the field.

Starting from the pole at the start, the leader probably didn’t see the racing behind him.

After a lap 1 caution, the action from Williamson on back between Scott Wood, McGinnis and Mike

Bowman let the leader pull away. After a lap 12 caution, McGinnis would settle into second spot ahead of Wood.

Once Brachmann landed in second spot, his late race charge got him to within a car length of Williamson at the finish.

Williamson and Brachmann were followed by McGinnis, Wood and Tyler McPherson.

“It’s a great way to start the season for sure,” said Rick’s Delivery Sportsman Feature Winner Gary Lindberg of Ridgeway, “right out of the box … we have the new car figured out!”

Lindberg resumed the lead with Paul Gaboury quickly taking second. At the half-way point Lindberg maintained a car length advantage on Gaboury. Through increasing lap traffic however Lindberg was able to open up a comfortable lead through to the checkered flag with Chad Chevalier, Brent Begolo and Rob Knapp closing out the top 5.