After taking pole position for every race and racking-up two strong victories the tables have been turned and he leaves Indianapolis with a healthy 44 point lead.

Priaulx got off to a strong start in Race 1 and set about pulling out a safety buffer between his Kelly-Moss Racing Porsche and the battle for second place. He managed the gap at around three seconds throughout the entire 45-minute race and crossed the famous yard of bricks, that marks the Indianapolis Motor Speedway start/finish line, taking the victory, the fastest lap of the race and, vitally, the championship lead.

Race 2 was a little more complicated for the young Multimatic racer. Starting from the pole he slipped back into second place as the race went green, slotting in behind eventual winner Parker Thompson. The young Guernseyman then successfully defended his position during a restart, after a mid-race caution, under heavy and aggressive pressure from a hard charging Riley Dickinson. However it wasn’t done at that point.

With just under nine minutes remaining, the race again went green after another caution. The restart was a carbon copy of the previous, but this time Dickinson misjudged his aggression and hit Seb hard in the right rear, spinning him off course as the pack streamed past relegating the #15 Porsche to 17th. Not to be discouraged by such a setback Priaulx rejoined, put his head down and set-off after making as many passes as possible in the remaining eight minutes. He ultimately salvaged a sixth place in class at the chequered flag, helped slightly by Dickinson being assessed a drive-through penalty for his error.

Starting from pole position for the third time in Race 3, Priaulx’s focus was on maximising points so when Parker Thompson jumped him for the lead into Turn 1, Seb was more giving than usual so both cars would make it through the infamously dangerous first corner. By the end of Lap 1 a yellow had been thrown while the internal fluids of a crashed car were cleared up from the start/finish straight. The race didn’t go green until there were just 15 minutes remaining and soon after it did, Thompson was forced to relinquish the lead to serve a drive though for his starting approach, leaving Seb to take the lead. After another short yellow, he again crossed the line as the winner and now leads the championship by a strong 44 point margin. 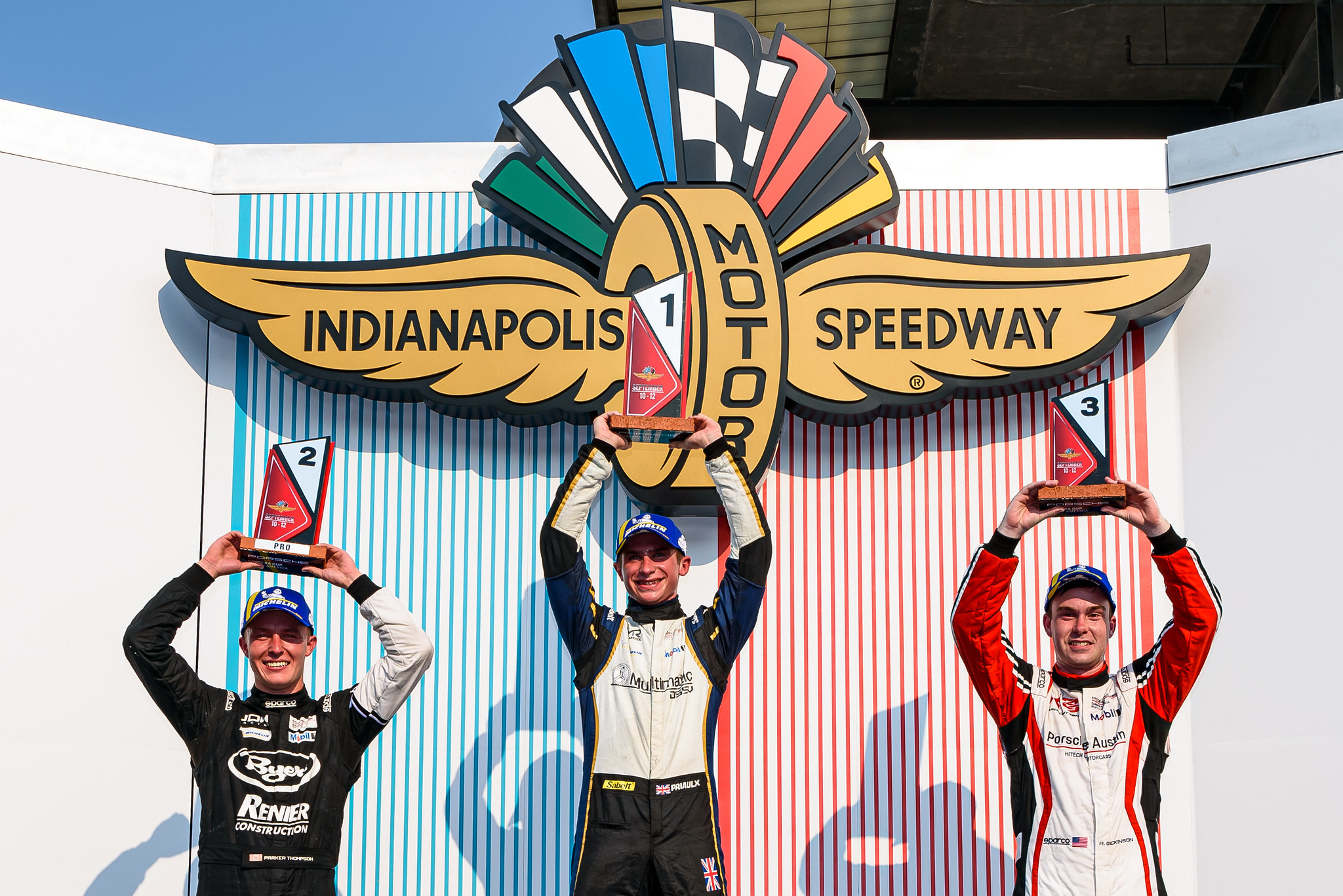 “It is a very special feeling to win a race at Indianapolis Motor Speedway,” said Priaulx. “To come here and win two races and take three pole positions feels incredible. I lost some points in Race 2 but to come away with a strong lead in the championship is exactly what I needed. What I need to do now is keep this focus and take it into the final races.”
Multimatic Motorsports boss, Larry Holt, said: “Seb’s performance at the speedway was nothing less than incredible. His competition in the series, amongst the top eight or so drivers, is outstanding and aggressive. Not only did he show his speed but also a high level of maturity giving way when the points haul became more important than an outright win. Even with that healthy application of restraint he still got spun around at the restart in race two. It was only a slight misjudgment by Riley, who is also an outstanding driver, but was disastrous for both of them. Seb lost 16 spots and Riley got a drive through. But again, Seb showed tremendous maturity, didn’t panic or give up and just picked-off cars over the last few laps to salvage a sixth spot in class. Really fantastic. It was a defining weekend for Seb, he really did finally put it all together. Not a final exam but an outstanding mid-term result!!”

The next event in the 2021 Porsche Carrera Cup North America takes place at VIRginia International Raceway on October 8-10.