A Win for Tagliani, A Rookie Rises and Heartbreak for Camirand at GP3R

Trois-Rivieres QC, CANADA – (August 16, 2021) – On Sunday Alex Tagliani won the prestigious Grand Prix de Trois-Rivières for the third time in his NASCAR Pinty’s Series career adding to his wins in 2017 and 2018.

Rookie Treyten Lapcevich rose to the challenge of his first Street Course race taking fourth, however after qualifying second, Marc-Antione Camirand had to park the No 22 GM Paille machine after only nine laps due to a transmission issue.

Although Tagliani had noticed something was amiss with the power plant of his No. 18 RONA/Viagara/St-Hubert Chevrolet during qualifying he put his faith in his team to diagnose and resolve the issue. Multi-time winner in various racing disciplines at the famed Grand Prix de Trois-Rivieres event Camirand seemed confident, and first-time road racer Lapcevich appeared to be equally satisfied with his No 20 RGC / Qwick Wick Chevrolet Camaro.

On a side note, Lapcevich hopped on a plane immediately after qualifying to compete in the APC Series at Sunset Speedway, then drove back to Trois-Rivieres to join the 22 Racing team to make his GP3R race debut.

Come race time fans settled into the stands under near perfect weather conditions after a one-year absence due to COVID-19. Starting from the front row Camirand wasted no time to challenge for the lead, with fellow Quebecer Tagliani methodically working his way forward. Lapcevich, hitting his marks held his own for the opening laps.

On lap nine Camirand’s No 22 machine began to slow on track. Heartbroken, he slowly nursed his now smoking car back to the pits, where it sat for the remainder of the 60-lap race due to a transmission issue.

“I knew I had a car to win which makes the situation even more frustrating. There was nothing that could have been done differently.” said the dejected pilot of the No 22 GM Paille Chevy “I will come back next year to get my 15th win” he added, with a desire to add a NASCAR Pinty’s Series win at GP3R to his collection of wins in other racing disciplines.

With pit strategy beginning to play out the 17-year-old pilot of the No 20 Chevy momentarily took the lead in his first start on a road course before heading to the pits himself.

Fittingly, on Lap 18 driver of the No. 18 RONA/Viagara/St-Hubert Chevrolet took the lead which he only relinquished once after a Lap 30 restart before regaining it. Constantly under threat Tagliani kept up the pace and remained focused on the task at hand. A restart with four laps remaining, Tag, had to hold off a hard charging effort by the No. 74 machine to take his third win at the legendary GP3R event.

“We were a bit nervous on how the engine was running, but the team changed what they needed to get the car back to exactly where I needed it to be to fight for the win. Huge thanks to the team for all their work” said three-time GP3R winner Tagliani.

The road racing rookie Lapcevich proved he was a quick study and kept charging in an attempt to secure his first GP3R podium, but ultimately crossed the line with an impressive fourth place finish. 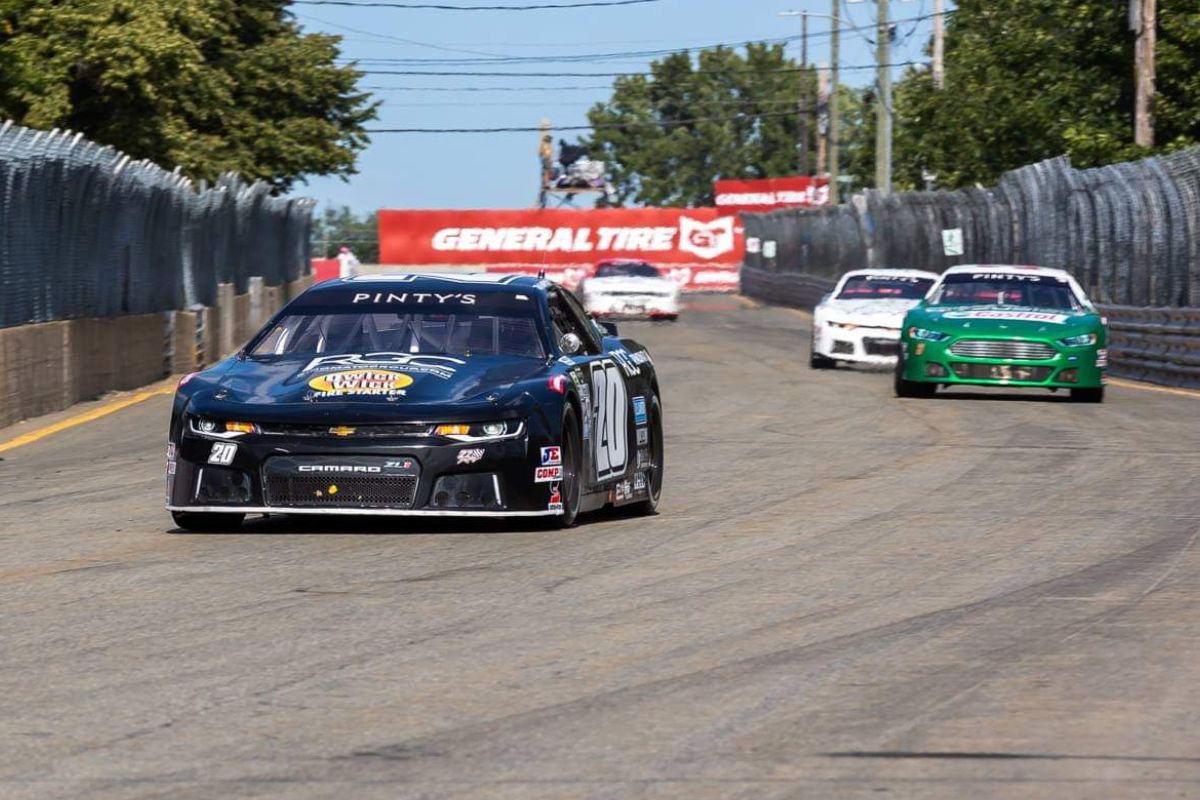 “Fourth in my first-ever road race. What a day!” enthused Lapcevich “A huge thank you to everyone who offered advice. It truly helped.”

The Guardian Angels 60 from GP3R will air on TSN on Sunday, Aug. 22, at 1:00 p.m. ET. Fans in the United States can stream races after they air on TrackPass on NBC Sports Gold.

Next up for the NASCAR Pinty’s Series will head to Circuit ICAR for the Lafluer 75 on Saturday, August 28.

This season the NASCAR Pinty’s Series races on oval tracks and road courses in Ontario and Quebec. For more information and updates throughout the season, please visit www.22racing.ca and NASCAR.ca.