by Wally Nesbitt
in Press Releases
0

Ottawa resident Harry Steenbakkers is one of the rising young stars this season the Ultra 94 Porsche GT3 Cup Challenge Canada by Michelin.

But it’s not a stretch to say he will have turned more laps at Calabogie Motorsports Park than any of his rivals – some of whom are 35 years older than him – as the drivers take to the starting grid for Rounds 5 and 6 of the series July 4-5 at the track. 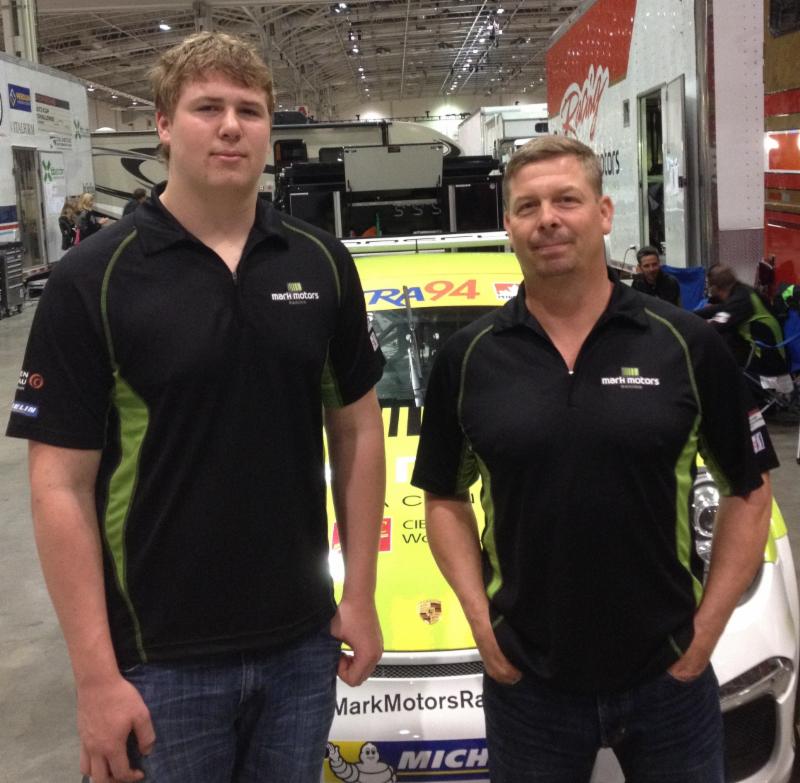 Steenbakkers, from Ottawa, has driven hot laps and raced at Calabogie since he was 11 years old. His father, Marc Steenbakkers, is part of the ownership group of the facility.

“He started running there as soon as he could reach the pedals,” Marc Steenbakkers said of his son. “We used to put him in fourth gear because he couldn’t really shift yet, and we sent him out with a radio, and he’d go until he ran out of gas.”

Said Harry Steenbakkers: “I always drive the car at the limit. I know the line better, probably will be a bit faster, more refined at the home track.”

That insider knowledge of the challenging 20-turn, 3.137-mile (5.05 km) circuit should help accelerate Steenbakkers’ considerable progress so far this season in the No. 78 Mark Motors Racing Porsche 911 GT3 Cup car.

Steenbakkers is tied for fourth in the Platinum Cup standings, with a best race finish of fourth. It’s an impressive performance for his first season in the International Motor Sports Association (IMSA)-sanctioned Single-Make Series.

The climb to the Ultra 94 Porsche GT3 Cup Challenge Canada by Michelin came after Steenbakkers spent time behind the wheel or handlebars of a wide variety of racing machinery since he started racing snowmobiles as a boy. He climbed to auto racing in 11, when he also started hot-lapping at Calabogie, and wasted no time showing his skill.

In 2013, Steenbakkers became the youngest participant in the Skip Barber IndyCar Academy Shootout, in which he finished second and earned a $15,000 scholarship.

Mark Motors Racing, based in Ottawa, has a close affiliation with Calabogie Motorsports Park and its ownership group, which includes Marc Steenbakkers. So when a seat opened this season in the powerful Mark Motors team next to Platinum Masters champion Marco Cirone, the team looked at potential prospects and focused on the quick, tall teen who competed in series sharing the track during numerous Ultra 94 Porsche GT3 Cup Challenge Canada by Michelin event weekends.

Steenbakkers got the call and the ride. And it took just one test for him to realize this was the ideal next step for his budding racing career.

“I could tell after the first time he drove it at Calabogie, his first test session, you could tell it was very different for him, but the grin on his face went from ear to ear,” Marc Steenbakkers said. “The old adage, a picture is worth 1,000 words.”

Marc Steenbakkers admits there was a time he aspired to compete in the series for a team like Mark Motors Racing. He is a regional racer in Ontario and Quebec. But it didn’t take long for Harry to establish his reputation as the fastest driver in the family.

“The reality is that if I was faster than him, I’d probably be in the car,” Marc Steenbakkers said. “But I’m not. That torch passed when he was about 13 ½.

“I come here pretty relaxed and let him do his thing. I watch him progress and get better, and his progression is fun to watch. It really is.”

Harry Steenbakkers is keeping a level head and approach about racing at his home track, a place where he has worked since he was 13, doing jobs such as changing fluids in track cars, rotating and balancing tires and performing janitorial duties. It’s also the home track for Mark Motors, which entertains numerous clients at the picturesque facility during the race weekend.

Plenty of eyeballs will be on Steenbakkers. But no worries.

“I’ve been finding you can’t really overdrive these cars, so the more relaxed you are, the better,” Harry Steenbakkers said. “So the home track should be more relaxed.”

Marc Steenbakkers also admits to no extra nerves watching his son compete in the marquee race at a track into which he has invested time, money and his heart and soul. His overwhelming emotion during race weekend at Calabogie will be pride as a father.

“It’s great,” Marc Steenbakkers said. “That’s why we’re doing this, and we want to do it. It keeps the wind behind his sails. It’s good fun. It’s a good education for him. We’re surrounded by a great bunch of people, and we’re having a good time doing it.”

Ultra 94 Porsche GT3 Cup Challenge Canada by Michelin: The Ultra 94 Porsche GT3 Cup Challenge Canada by Michelin enters its fifth season in 2015 ready to produce more intense, exciting competition for semi-professional and aspiring professional drivers in the world’s most produced and iconic race car, the Porsche 911 GT3 Cup. The International Motor Sports Association (IMSA)-sanctioned championship is one of 20 global Porsche single-make Cup Racing series and is the perfect platform for aspiring drivers to ascend to the highest levels of GT competition, such as the TUDOR United SportsCar Championship.

Racing is divided into two classes – Platinum Cup, featuring the 2014 and 2015 Porsche 911 GT3 Cup car, which is based on the seventh, and current, generation of the street car; and Gold Cup, which is comprised of the previous iteration (model years 2010-2013) of the race car. A Masters Championship also is conducted in the Platinum class. Each class is awarded with its own podium at the end of every race and individual champion at the end of every season. Points are awarded by finish in class.