RJ Valentine: On a mission to make race tracks safer

by RJ Valentine
in Press Releases
0

In mid-2016, I wrote an article explaining why I’m so driven to make race tracks safer. For eleven paragraphs, I stood on my soapbox expounding the many reasons antiquated track barricades represent an unnecessary and extreme danger to drivers. I vainly hoped this, along with our many other efforts to further the cause, would help inspire changes.

Yet, here I am, over a year later and, not only has progress been minimal, but at least 16 more drivers have died as a result of concrete walls, Armco guardrails and other antiquated barrier methods. No one officially keeps track of how many people die on track, especially at small independents, which make up the majority of America’s 1300 race venues, so the death toll is realistically much higher.

Sadly, over the last 18 months, innumerable concussions, injuries and permanent disabilities were also sustained, most caused by hard impact with a retaining wall or guardrail, which could have easily been prevented if anyone cared enough to do something about it.

Why haven’t any of these tragedies, or those before, provoked the motorsports industry to do the right thing? The answer is stunningly simple. Right or wrong, dangerous or life threatening, the racing world tends to accept the status quo.

Given the rising awareness of football concussions that have sparked unprecedented lawsuits, you’d think upgrading barricade walls to prevent traumatic brain injuries would become paramount. Alas, even racing insiders admit motorsports is reactive versus proactive, and is so fragmented that it’s near impossible for safety improvements to be adopted industry wide. 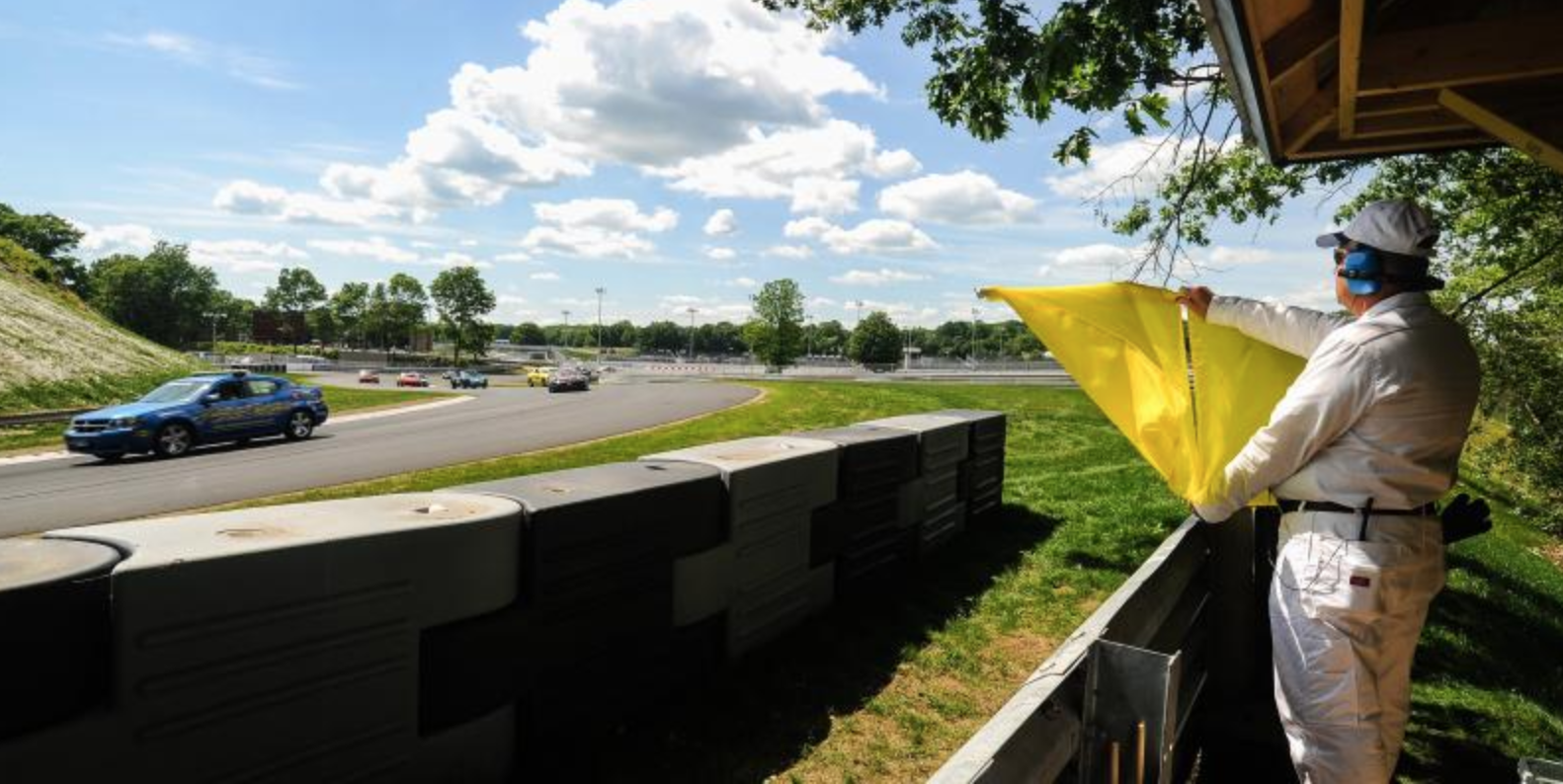 Football draws about 1.8 million players from youth to pro. Stats show approximate 4 -13 players die each year. Meanwhile, the number of drivers ranges between 50,000 and 400,000 including weekend warriors and HPDE. Even when conservatively applying the higher number, racing’s death rate is over five times that of football. According to the book “Motorsports Medicine” by Dr. Harlen C. Hunter and Rick Stoff, the risk of a fatal accident in auto racing is about 30-times higher than football, with head and neck damage responsible for at least half. Add driver injuries and disabilities on top of deaths and the total is overwhelming.

Here’s a scary thought: How many drivers race with concussions and don’t even know it? Though NASCAR requires neurocognitive baseline assessments, who’s watching out for the thousands of other circuit participants? It only takes one abrupt stop to rattle your brains and there’s a good chance almost every racer will be involved in a bell-ringing crash during his career. The issue could eventually open the door to major lawsuits like the NFL.

When the HANS Device was first introduced in the late 1980s, racing safety companies refused to manufacture it and drivers balked at wearing it. Jim Downing never gave up, but it wasn’t until 2001 after the loss of Dale Earnhardt that NASCAR finally mandated the HANS head and neck restraint system, eventually followed by other sanctioning bodies. It took over 20 years and countless basilar skull fracture deaths, not to mention CTE concussions, before motorsports seriously considered this critical life-saving device.

Despite the HANS advancement, concussions and CTE incidents continue increasing. There’ve been many cases of concussed racers who later developed double vision, memory lapses and more. New testing, helmet technologies and rescue techniques are in the works, yet there’s a blatant blind spot when it comes to the core of the problem. We keep treating the symptoms without addressing the disease. No amount of safety equipment or medical technology spares drivers from slamming into immovable walls and suffering “Delta V” sudden deceleration.

What exactly did Earnhardt hit during his last lap at Daytona that ultimately killed him? A cement retaining wall. The list of concrete-related fatalities dates back 60-80 years, as does Armco guardrail’s. 30 odd years ago, used tire packs became the standard barrier or buffer but, other than NASCAR’s SAFER Barriers, which aren’t feasible for most tracks, little else has changed. For the better part of a century, these walls have existed at racetracks worldwide. Shockingly, even brand new state-of-the-art motorsports facilities are installing stone age barrier systems because it’s the status quo.

Racing organizations generally leave safety to track owners. But, independents are the most cost-sensitive to safety upgrades and tend to rely on insurance. Track designers certainly don’t want to be the disruptive influence. Thus, everyone takes the easy route and uses concrete walls or Armco in prominent areas around tracks. And, since most track owners, insurance agents and designers have never even been behind the wheel of a race car, let alone barreling high speed towards a looming wall, they’re unaffected by the risks.

Drivers are the only necks literally on the line. So why do they continue to accept the status quo? Are racers afraid of creating controversy? Maybe they live in denial and assume a career/life ending incident will never happen to them. Perhaps admitting one’s darkest fears or revealing a history of concussions are viewed as signs of weakness. Or the worst reason of all—It’s simply another example of motorsport’s “it is what it is” mentality.

Racers are a special breed. The thrill of competition and victory far outweighs the agony of defeat or the specter of death. As a pro racer myself, I completely understand the addiction. But I’ve also seen too many friends killed by unforgiving walls. I feel I have a moral responsibility to help prevent the worst from happening. Since the mid-1960s when Sir Jackie Stewart rallied racers to demand improvements, no one else has taken a stand for track safety. Instead, the motorsports industry chooses to ignore the issue in the name of tradition.

Ultimately, it’s up to drivers to decide enough is enough. However, if they remain rigid, so will barrier walls. Racers must insist bare concrete and Armco be buffered before vehicles ever get to that final resting place. And FYI, tires were designed specifically for cars on roads, not to function as safety barricades for driver protection. There are better ways to slow deceleration and reduce shock before terminal impact occurs. The barrier system I developed is lightyears ahead of the status quo, yet it’s been a long road to acceptance much like Downing’s HANS Device. But I don’t take it personally. Industry resistance applies to all changes, even those for the better.

The only way to alter the complacent motorsports mindset is for drivers to start a movement. And the sooner the better, because every year that goes by means more racers maimed and killed by walls that remain stuck in the past. If nobody else will fix the problem, then it’s up to the ones whose lives are at stake—Drivers. Believe it or not, you have the power to prevent injuries, disabilities and death in racing.

Maybe now that I’ve ranted for 15 paragraphs someone will listen. If not, next year I’ll write 20.

About Richard “RJ” Valentine: Richard J. Valentine combined his passion for business and auto racing to achieve remarkable success in both fields. As a driver, he’s been a major player in competitive racing for four decades with over 400 pro starts, culminating with a win at the prestigious Rolex 24 Hours at Daytona. Valentine continues to be a force on the track and, when he realized there was a dire need for a better barricade system, he took it upon himself to invent one. In 2000, Valentine founded Impact Safety Systems (ISS) Barriers for the express purpose of setting new standards in driver protection. A native of Boston, Valentine now lives in Hingham, Massachusetts. // Contact: Kim Miyade // Tel: 310-287-2222 // Email: theadco@pacbell.net

Performance Improvements: New RaceQuip helmets are in-stock and on sale