Parker Displays Race Pace in all Sessions at Season Finale
Masterful Move in Turn 3 at the Start of Race One and Two Flawless Restarts Keys to the Race Weekend
Thompson Drives the No. 9 Byers / Shell TapUp Porsche to a Championship Finish
Parker Claims the Top Step in the First Race of the Weekend, adding a P3 Finish in the Finale

PARKER THOMPSON, CHAMPIONSHIP DRIVER:
“I’m so proud of this JDX Racing team! All season long we battled, and usually from behind. We worked, we studied, and we never quit. That takes great leadership. Jeremy and JoAnne Dale along with Harrison Brix aren’t just the letters in JDX, they are the reason I have a career in Motorsports and a Championship today. Our partnership group with Kevin King at Byers Porsche, Bill, Beth, and Michael Wappler at Surgere, everyone at Shell Tap-Up, Renier Construction, Jersey Mike’s Subs, and SSi Artificial Lift, plus all of our people with boots on the ground for race days have shown a resounding commitment to our campaign. There is no doubt in my mind that we have earned this title on merit. I will never be able to thank Luke, Larry, Darryl, Dan, and the rest of the crew at JDX enough for their time away from families invested in the No.9’s success.” 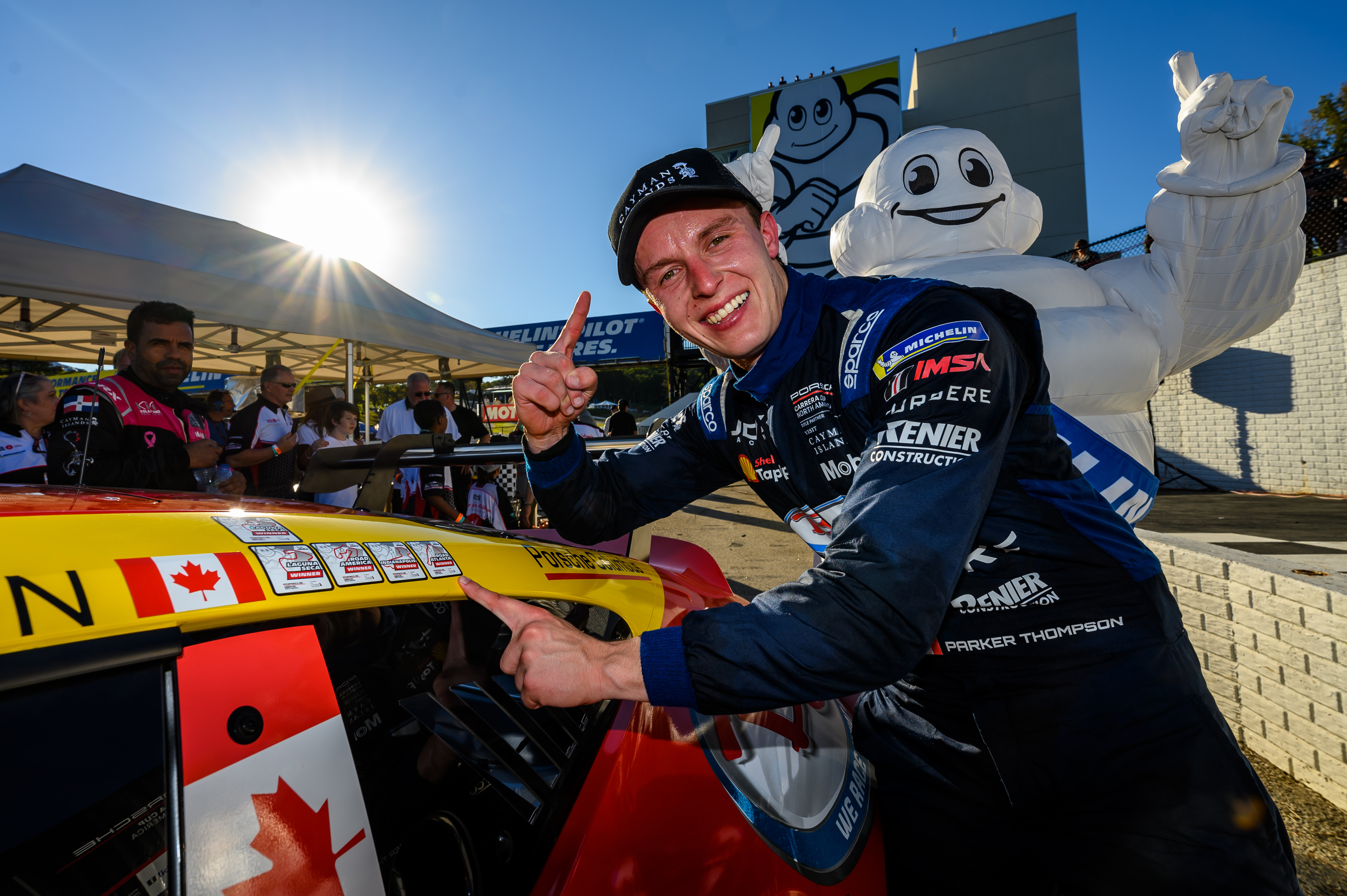 “I’m still a young guy, but from the number of times I’ve finished second in championships, I sometimes feel like I’ve been around a long time. I’m so grateful to take this title. Porsche Motorsport North America and IMSA put on an outstanding series. The 992 Cup has been a pleasure to learn and drive, and the level of competition between drivers has been like no other series I’ve experienced. No doubt some of my fellow drivers might also be worthy champions, but I’ll take the title and offer full recognition to one team that clearly outdid the rest – even if we only had one car!”

JEREMY DALE, MANAGING PARTNER/JDX RACING:
“The only thing I can say is this is a lesson in perseverance and hard work, and that’s what Parker and this team demonstrated this year. Every season has high points and low points, but you must not be distracted by the moments that feel unfair or unjust- you must keep your head down and stay focused on the task at hand.”

“Everyone involved in this team and this endeavor make huge sacrifices to make this happen and I want to thank each one of them for their hard work and dedication. None of this happens without them.”

“Along with the commitment from team members – we can’t overlook the contribution of our partners – especially Byers Porsche Columbus, Shell TapUp, and Renier Construction. It takes profound support to make our world go round – and all of our partners have been there for us believing in our program and our vision. I can not thank them enough.”

“Lastly- Parker is in a class of his own. He leaves nothing to chance and no detail is overlooked. He deserves this championship because he did the work and every time he got in the car he gave 100%. He’s now on his way to bigger things in this sport and we’re proud to have been a part of that.”

About JDX Racing: Founded in 2008 and based outside of Denver, CO, JDX Racing represents the very best in professional motorsports. Competing in the IMSA sports car series, JDX Racing campaigns cars in eight events throughout North America. JDX Racing features world-class drivers, outstanding crew members, and dynamic marketers from Champ Car, IndyCar, NASCAR, ALMS, and the ChampCar Atlantic Championship series. For more information, follow us on Facebook at facebook.com/jdxracing, on Twitter @JDXRACING, and Instagram at jdxracing.

Be sure to check out our sponsors, Shell TapUp, Sugere, Renier Construction, SSI, Jersey Mikes Subs