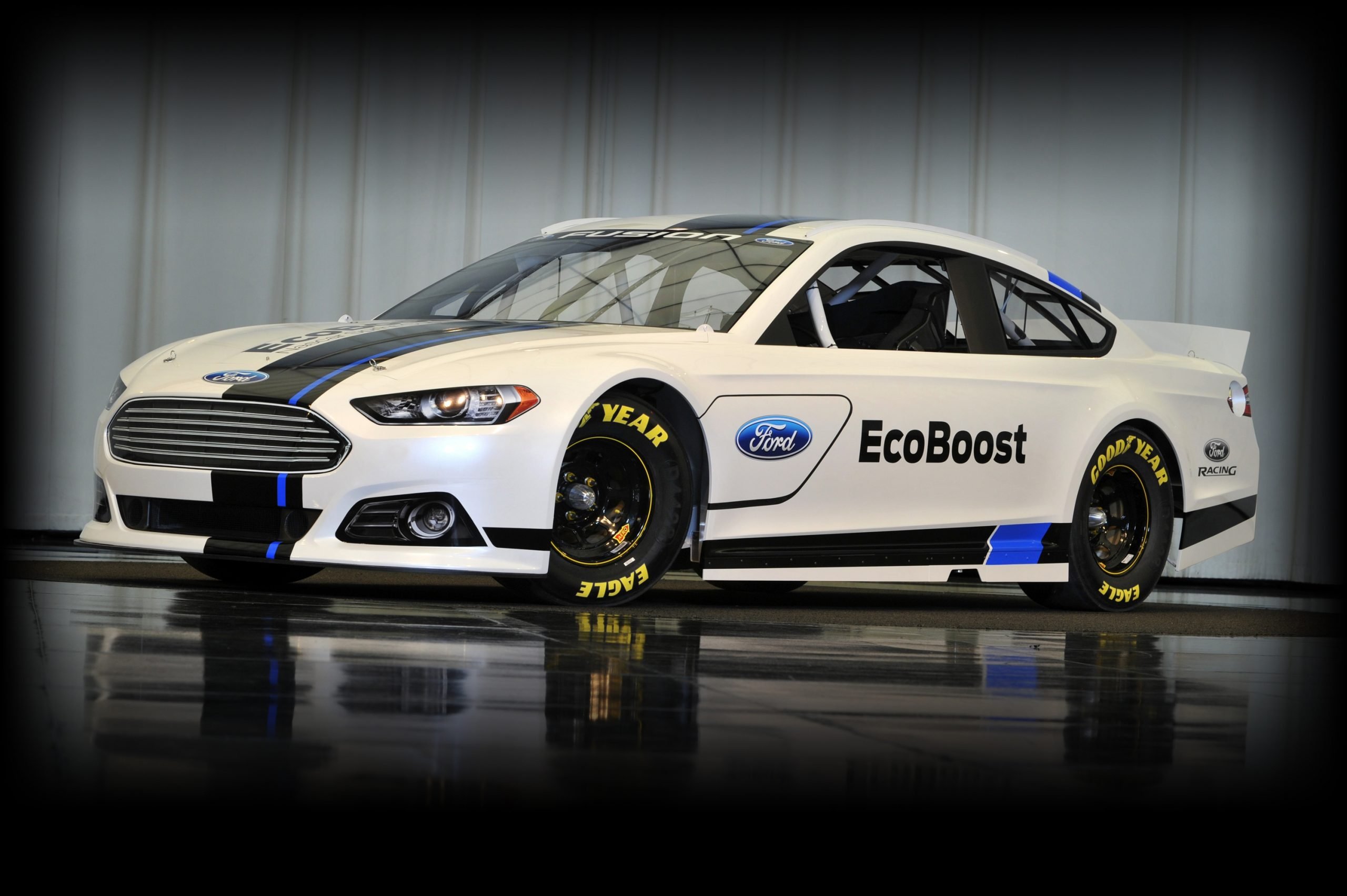 CONCORD, n.c, Jan. 24, 2012 – Manufacturer brand identity is back in NASCAR. – The 2013 Ford Fusion NASCAR Sprint Cup car, unveiled today as part of the Charlotte Motor Speedway Media Tour, was worked on by Ford designers in an effort to bring brand identity back to the sport.  The result is undeniable with the 2013 Sprint Cup car mirroring the recently unveiled 2013 Ford Fusion production car.

Featuring a completely redesigned sleek new silhouette and fresh face, the 2013 Fusion Sprint Cup car was designed to be the face of a new era of stock car racing.

“We wanted Fusion to be the car that helped return ‘stock car’ to NASCAR,” stated Jamie Allison, director, Ford Racing.  “I think fans, when they see the car, are just going to smile and cheer. It is going to reengage them with the sport and make the sport better because there is just something natural about seeing race cars that look like cars in their driveways.”

This marks the third time Ford simultaneously launched production and NASCAR versions of a new model. The first dual launch came in 1968, with the sleek fastback Ford Torino. Legendary NASCAR driver David Pearson drove the Torino to back-to-back NASCAR championships in 1968 and 1969. The second time came in 2006, when the then newly introduced Ford Fusion appeared in showrooms and on the track.

Ford took a different approach with the development of the 2013 Fusion racer. Ford Design Center staff, led by Garen Nicoghosian, and Ford aerodynamicist Bernie Marcus, spent the past year doing the early design development, freeing up the Ford race teams to concentrate on weekly NASCAR competition.

“This is a seminal moment in the sport where we had a chance to get it right once again and make sure the race cars are race versions of street cars.  And I am proud because I believe we have accomplished just that,” continued Allison.  “The 2013 Fusion is a stunning car and the 2013 NASCAR Fusion is even more stunning and I can’t wait to see it perform on the track and connect with race fans.”

·         Designers addressed the overall proportion of the race car to reflect proportions found in the production Fusion.

·         An identifiable front end grill with the distinctive look of a Ford.

“It looks fun to drive and very much eager to go and tear up the track.  It has a very aggressive stance from the outside and the inside.  From all angles the vehicle exudes performance and I think it reflects our general attitude of how we go about setting up our cars very, very nicely,” said Nicoghosian.  “It brings a certain level of nimbleness and lightness and agility to the NASCAR platform, much like we do in our production cars, because all of our production cars have that nimbleness and agility and eagerness about them.”

The new NASCAR Fusion entries will be tested throughout the 2012 campaign in preparation for their racing debut at the 2013 Daytona 500 in February.