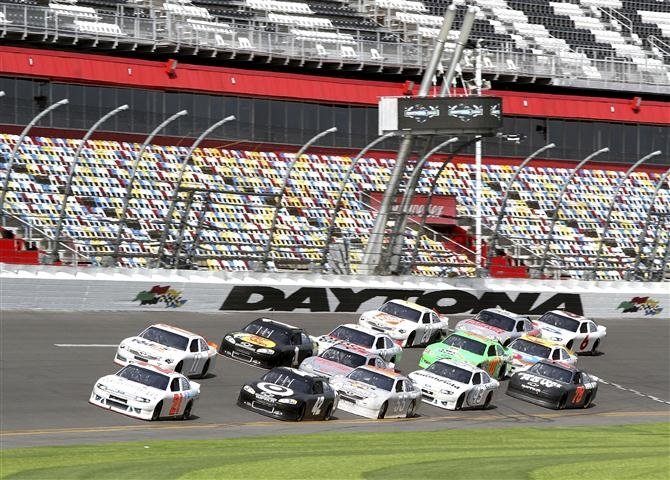 DAYTONA BEACH, FLORIDA — As with any test, especially one as important as 2012 Preseason Thunder at Daytona, getting it right and being open to make adjustments is key. After the late afternoon practice session on Thursday, NASCAR announced changes for Friday’s test session with an increase in the diameter of restrictor-plate openings by 1/32nd of an inch to 15/16ths inches, adding an estimated 26 horsepower to the engines.

In addition, they lowered the pressure relief valve settings from 30 pounds per square inch to 25 psi and narrowed the grille openings of the cars, thereby decreasing airflow to the engine. Both measures were designed to decrease the number of laps one car can push another without overheating.

As stated by NASCAR officials, this is not only a test for the teams but for NASCAR as well.

“Our goal and our responsibility is to try to make decisions so that racing is as good as everybody expects it to be or better during the Daytona 500,” said NASCAR President Mike Helton, addressing the media during the lunch break of today’s session.

NASCAR asked drivers to participate in a pack drafting session during the afternoon session to assist in the gathering of information teams and officials were looking for in hopes to be able to apply to a baseline when we come back for Speedweeks next month.

“We did some drafting, which is very interesting,” said four-time NASCAR series champion Jeff Gordon. “With the smaller spoiler and restrictor plate, cars have a lot of power, a lot of speed and that has changed things a bit.”

Following the afternoon session, NASCAR conferred with its notes and decided to implement additional changes for Saturday, the third and final day of Preseason Thunder.

Changes implemented included the closing of the bottom of the radiator opening; reducing radiator pressures approximately four pounds and a return to the restrictor plate used in Thursday’s test session.

“We’re going to continue to work on aero packages and plate sizes and all types of things from now until the day we sign back in here at Daytona,” said Vice President of Competition Robin Pemberton.

Daytona Test Day #3: The pack is back