While there were many big stories coming out of Luskville Dragway on the May long weekend, all of them flowed from the fantastic weather. When it comes to the business of racing, the weatherman can make or break an event, and it definitely ‘made’ the event this weekend.

The result was a record turnout of race cars for the Malcolm Carpentry Opening Weekend at Luskville. Never before in recent memory has this event been blessed by such fantastic weather.

Things got underway Friday with an early ‘test and tune’ session. This was a popular draw and set the stage for Saturday, which opened with Door Pro and Juniors. The result was a pair of popular wins Chevy Morrow was the first Junior Dragster winner of the season as he took his brand new car to the Winner’s Circle and the points lead. He defeated Dylan Wheeler for the honour.

In Door Pro, Bobby Brown – who has been racing longer than even he cares to admit – was the big winner as he met and defeated Russ Adams in the all-Dodge final. Dave Gould (below) and his awesome looking and incredible running Chevy Beretta was the lone semi-finalist. 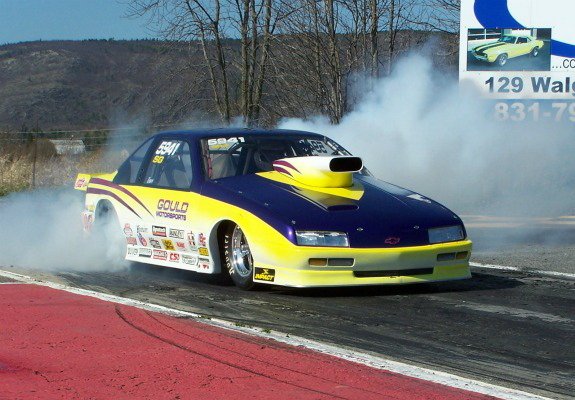 Next up was Super Pro and Semi Pro. Russ Adams kept his winning ways going once again, advancing to the finals. But this time, he finished the deal, taking home his first win of the season beating Denis Souliere in the finals.

Another popular win was earned by Rob Graveline in his Copperhead Road Opel in Semi Pro. He met and defeated Joe Doyle in the finals. Following the racing action on Saturday, the attention turned to the Cruise Night, which drew more than 200 cars and continued until well into the night.

Day Two of the racing action at Luskville was again graced by superb weather and hot temperatures. The Super Pro split ladder format was the main event, but the day started off with more Junior Dragster action. Randilynne Urslak scored her first big win of the season when she defeated Ben Vanoppen in the Finals. According to Urslak, 2012 will be her last year racing in the Junior class and she’s aiming to graduate from the division with a championship.

Next up was Semi Pro which had a great turnout for opening weekend with 26 entries in action. Veteran racer Mark Thompson was the big winner when he defeated Ian Gould in the finals. Gould’s Mustang had performed well all weekend. Mike Scott of Sturgeon Falls, ON was the lone semi-finalist, in his ’66 Mustang.

Super Pro was the strongest class of the weekend, with credit for that going to the ‘split latter’ format that has brought a breath of fresh air to the door car class. As things progressed to the quarter-finals, there were an equal number of door cars and dragsters. And in the finals, it ended up being a door car against a dragster.

Franco Cantusci and Denis Souliere (who was in the finals for the second time) were in the hunt for the big prize. In the end, Cantusci and the door car prevailed with a win. Denis tripped the red light but still had to be proud of his successful weekend.

Mike Reynolds, who will be a strong candidate for Super Pro Rookie of the Year, was the lone semi-finalist. The racing action – along with some spectacular runs by the Funny Cars – made for the best ‘May 24’ weekend in the track’s history.

Luskville Dragway will be back in action next weekend with a Cruise Night on Saturday and a regular card of racing on Sunday.