In the May 21st edition of Spencer Lewis’ Short Track Notebook, we speak with Andre Pepin about the emotional start to his 2014 season, interview Travis Hallyburton about his rough outing on May 17th and ride along with Barrie Speedway champion Mike Gettliffe and third-generation star Dale Shaw.

Midland, Ontario driver Andre Pepin opened his 2014 season with a Barrie Speedway Limited Late Model feature win on May 10th. Tragically, Pepin’s car owner Ron MacLennan passed away the next day. We had a chance to catch up with Andre, and ask his thoughts after the whirlwind start to the 2014 season.

“Over the winter, Ron MacLennan called me, looking for a driver. For me, it was like getting a call from Roger Penske. I’m very appreciative and humbled for the opportunity, and will be forever grateful. He has provided the team with top notch equipment and a signature MacLennan engine. We worked all winter learning from one another, and worked to put our program together. The car was strong in practice, and come raceday we struggled in our first feature, but the team made adjustments that allowed us to hit our marks and win the second feature of the night. Everyone on the team was excited to collect the win for Ron, who was in the hospital and unable to attend. The next morning, we received word that Ron had passed away. One minute you’re on top of the world, the next you’re mourning the loss of your friend and team owner. It’s been an emotional week to say the least.” 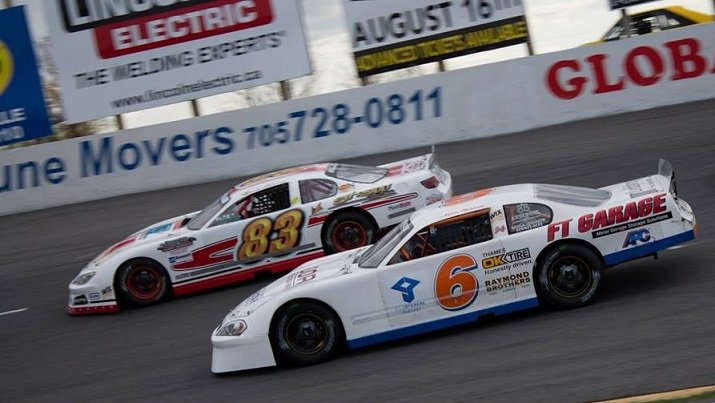 Flamboro Speedway Pro Late Model regular Dale Shaw (No. 83 above, by Thompson Photography) was in the field at Sunset Speedway’s recent ‘APC 100’ invitational. The third-generation competitor made sure to bring along his trusty ‘GoPro’ camera, and has sent along some phenomenal footage picked up during the event. Click here for the video and follow Dale on Twitter @DaleShaw83. 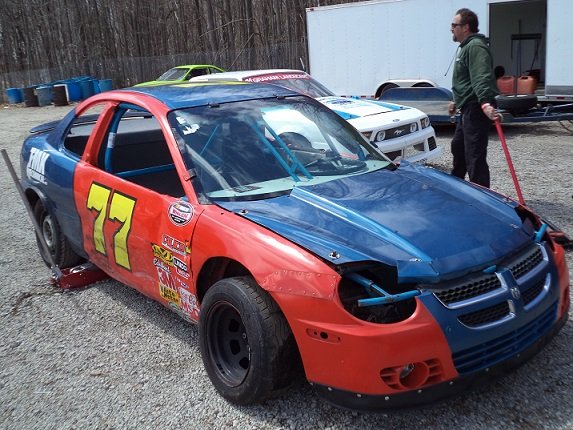 Defending Barrie Speedway Mini Stock titlist Mike Gettliffe has launched a new Youtube channel to feature his own on-board camera videos. ‘The Valet’ had his camera recording when he turned in a runner-up performance at Barrie on May 10th, and came home with some very entertaining footage. Click here for the video and follow Mike on Twitter @MikeGettliffe.

Sunset Speedway Limited Late Model Rookie of the Year Travis Hallyburton (above, by Thompson Photography) had a rough outing on May 17th. ‘.50 Cal’ was tagged by another competitor and spun into the inside retaining wall, heavily damaging his chassis. We caught up with Travis afterwards, and the Hillsdale, ON driver gave us his side of the incident, swore he will return to competition and speaks openly about the difficult transition from Thunder Car to Limited Late Model. Click here for the interview.