In the July 4 edition of Spencer Lewis’ Inside Track Ontario Short Track Notebook, Spencer updates us on several prominent short trackers, including Barrie Speedway’s Gord Shepherd, Mini Stock stars Billy Schwartzenburg and Dave Bailey, Cole Timm and CVM standout Steve Trendell. We recently caught up with current Barrie Speedway point leader Gord ‘The Smoke’ Shepherd (above, by Dan Craik). The Oro-Station, ON driver speaks on his fantastic start to the 2013 season, the state of the Barrie Speedway Limited Late Model roster, his burgeoning Ridge Road Racing set up business and his rededication to his Saturday night program. Check out the interview, in its entirety, here.

Mini Stock ace Billy Schwartzenburg (above, by Thompson Photography) recently captured victory in the first event of the Sauble vs Sunset ‘Home and Home Series’. To commemorate the victory, Schwartzenburg’s Spira Fire Protection team has uploaded footage from the Mustang’s roof-mounted camera. The footage shows Billy’s jump to the front of the field, his navigation through lapped traffic and his tremendous late-race battle with Sauble veteran Cory Young. The race can be viewed on Billy’s Youtube page here. 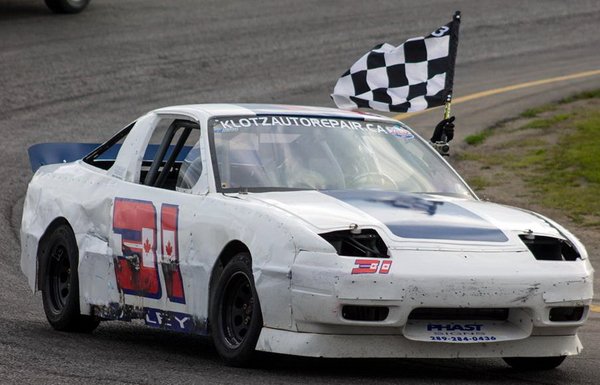 Flamboro Speedway Mini Stock star Dave Bailey (above, by Thompson Photography) has uploaded phenomenal footage of his run from deep in the field at Flamboro’s recent June 30th invitational. The multi-time track champion navigates traffic like a pro, eventually managing a 5th place finish. This one is well worth the view, find it here.

PASS Super Late Model standout Cole Timm will make his first ever Late Model start on Canadian soil this Saturday at Flamboro Speedway. Cole, the son of former Flamboro regular Murray Timm, races fulltime with the North Carolina-based PASS Tour, and will step into a Steve Laking-owned ride (above, by Thompson Photography) for Round 2 of the Grisdale Triple Crown. Sponsorship for the team’s outing this weekend includes Spira Fire Protection and Boucher & Jones Fuels. Gate times and ticket prices for the event can be found at www.FlamboroSpeedway.ca. Follow Cole on Twitter, @ColeTimm57.

Steve Trendell (#57 above, by Thompson Photography) took time out of his busy practice schedule on Sunday afternoon at Sunset Speedway to talk to us about the Canadian Vintage Modified division. The karting standout turned CVM veteran explains the ins and outs of his ride, the affordable touring aspect of the Canadian Vintage Modifieds and what it takes to compete in one. The informative one on one can be found here.