OHSWEKEN, Ont. (August 26, 2022) – Insta-Panels presented one of the most memorable Art Hill Memorial races ever at Ohsweken Speedway on August 26; Jeremy Hughes won the 20th running of the Art Hill Memorial 42, while Liam Martin, Andrew Hennessy, and Dave Bailey won their respective A-Mains.

HRW Automotive Mini Stocks
The 20th running of the Art Hill Memorial 42 featured Tristan DaSilva and Jeremy Hughes on the front row of the grid to start the 42 lap Mini Stock A-Main. By lap three Rodney Rutherford had already raced up to the lead from row three; on the other hand, Tyler Lafantaisie was having a solid run in fourth, keeping pace with the front runners. Traffic came into play on lap 21, allowing Hughes to move back into second, overtaking Fabio Oliveri. Things got worse for Oliveri as he suffered a flat right front tire and brought out the yellow flag.

The restart saw Hughes, Lafantaisie, and Rutherford almost go three-wide for the lead, putting on a great show for the fans; Hughes had just edged ahead of them as a caution came out with two laps to go. A classic green-white-checker finish would decide the winner of the race. Hughes timed the restart perfectly and inched ahead of Lafantaisie and Rutherford; Rutherford’s car suffered a mechanical problem which caused him to veer to the right and hit Lafantaisie, throwing off his momentum. Oliveri took the opportunity and passed the damaged car of Rutherford for the third spot. Hughes cruised to the checkered flag, taking the prestigious Art Hill Memorial 42 victory and the $1,000 grand prize. Lafantaisie took his war-torn car across the finish line in second, followed by Oliveri in third, Nick Erskine fourth, and Eric Yorke fifth. A 133 point lead now separates championship leader Lafantaisie from Oliveri.

Kool Kidz-Corr/Pak 360 Sprint Cars
Josh Hansen and Jake Brown led the 24 car field to green to start the 20 lap 360 Sprint Car A-Main. Aaron Turkey went for a wild ride during the first lap as he flipped his car multiple times after clipping Jacob Dykstra; Turkey got out of his car under his own power and appeared well, but was done for the night. Hansen took the lead after the restart, holding off the two Brown brothers – Mitch and Jake. Nick Sheridan bided his time in the fourth position, while point leader Cory Turner struggled to gain ground from his starting position in row eight.

Ryan Turner briefly appeared in the top three, showing a glimmer of hope of getting his championship run back on track, however he faded a few laps later. Liam Martin made the winning pass on polesitter Hansen with two laps left to go, picking up his third win of the season. 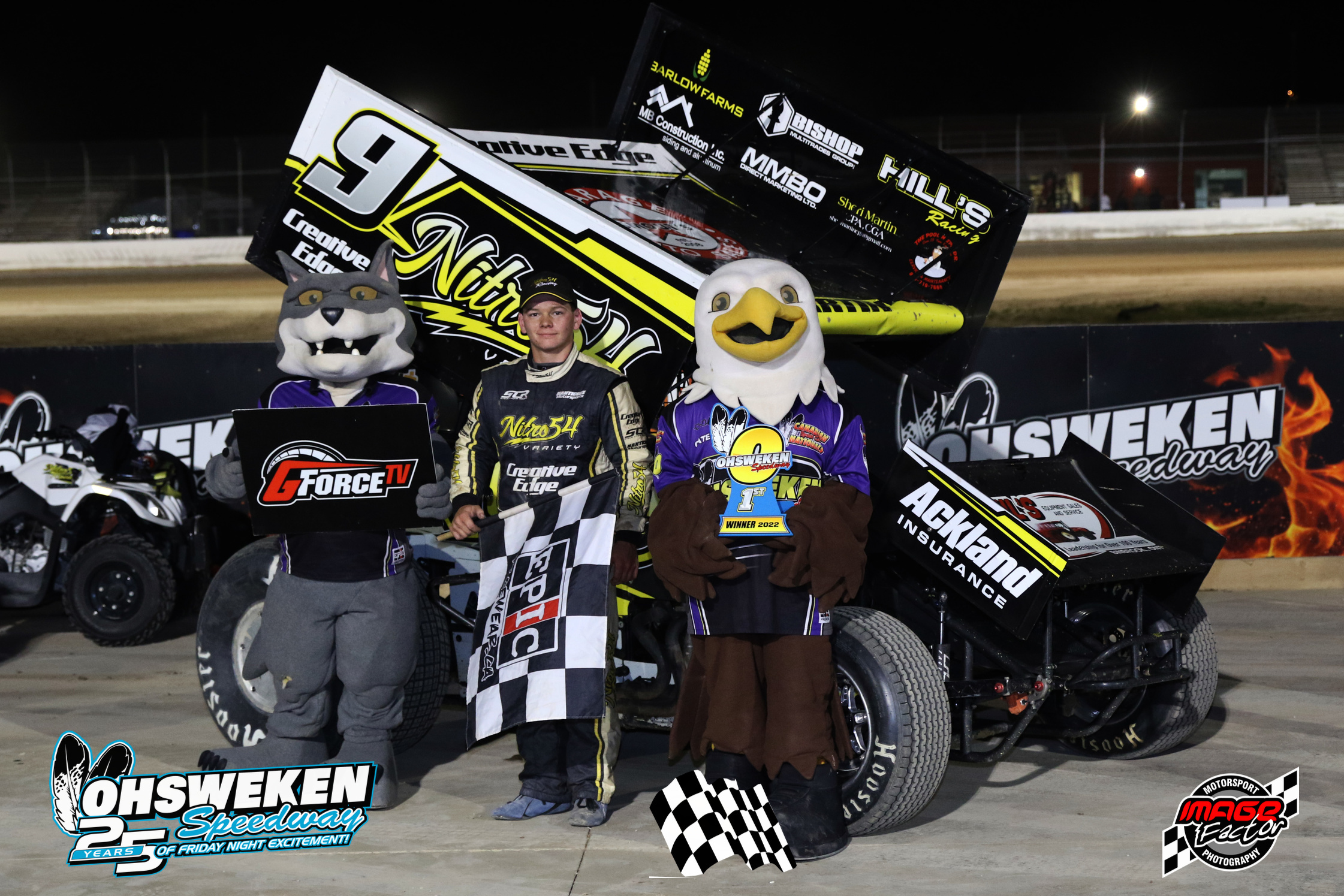 Rounding out the top five was Hansen in second, Sheridan third, Mitch Brown fourth, and Dylan Westbrook fifth. With one more full points race left in the season, Cory Turner left the night with a 33 point lead over Martin for the championship.

Dirt Late Models
Brian Speelman and Gregg Haskell led the grid to get the 25 lap Late Model Open A-Main underway. An excellent turnout of 29 Dirt Late Models had fans of full-fendered action buzzing. Haskell finally got around Speelman after stalking him for five laps, and it appeared that the open engine cars were going to run away with the win until a caution came out, neutralizing the race. The crate engine-powered car of Andrew Hennessy benefitted from two restarts, and he drove into the lead after starting in row six.

Hennessy found speed in the bottom of the track, gaining a two second buffer over the pack. Charlie Sandercock, also using a crate engine, was able to obtain the second position with four laps left to go after battling Haskell for many laps. The crate engines prevailed, proving less can be more, as Hennessy crossed the finish line in first and picked up the $2,000 grand prize. 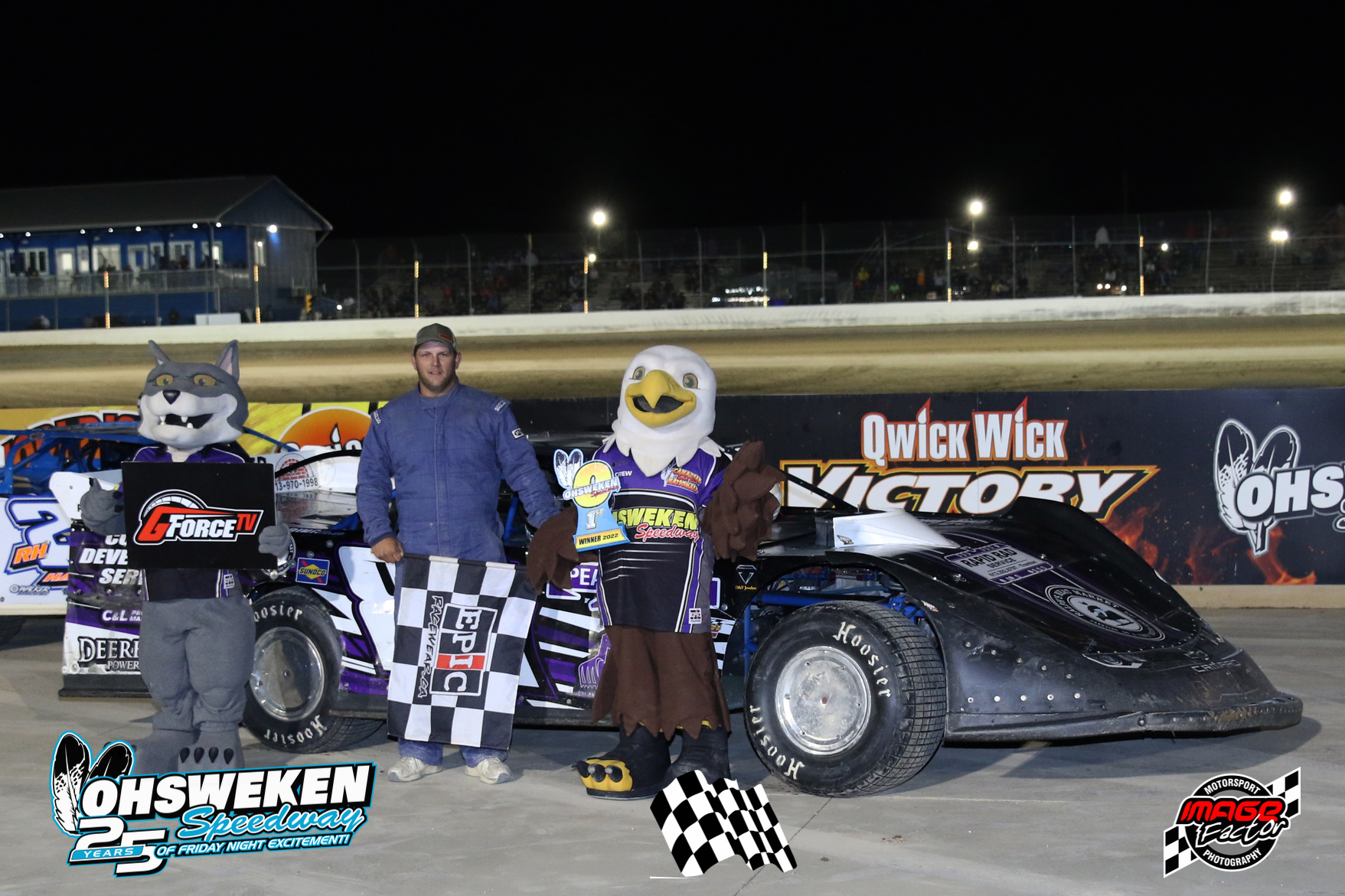 Sandercock’s last outing at Ohsweken saw him win, but this time he settled for second, while Haskell finished third, Andrew Reaume fourth, and Jim Dale Jr. in fifth.

Middleport Mechanical Thunder Stocks
Kacey Huffman and Gofast Teeple led the grid to start the 20 lap Thunder Stock A-Main. Logan Shwedyk quickly pounced on the leader after starting in the fourth position, only to have Dave Bailey take it away from him on lap seven. Bailey amazingly navigated his vehicle to the front, passing seventeen cars in the process. A quick caution saw title contender Ryan Beagle capitalize on the restart and move up to fourth.

A late caution set up a three lap dash to the finish, which saw Bailey and Trevor DeBoer duke it out for the win. Bailey came out victorious once again, picking up his seventh win of the season. 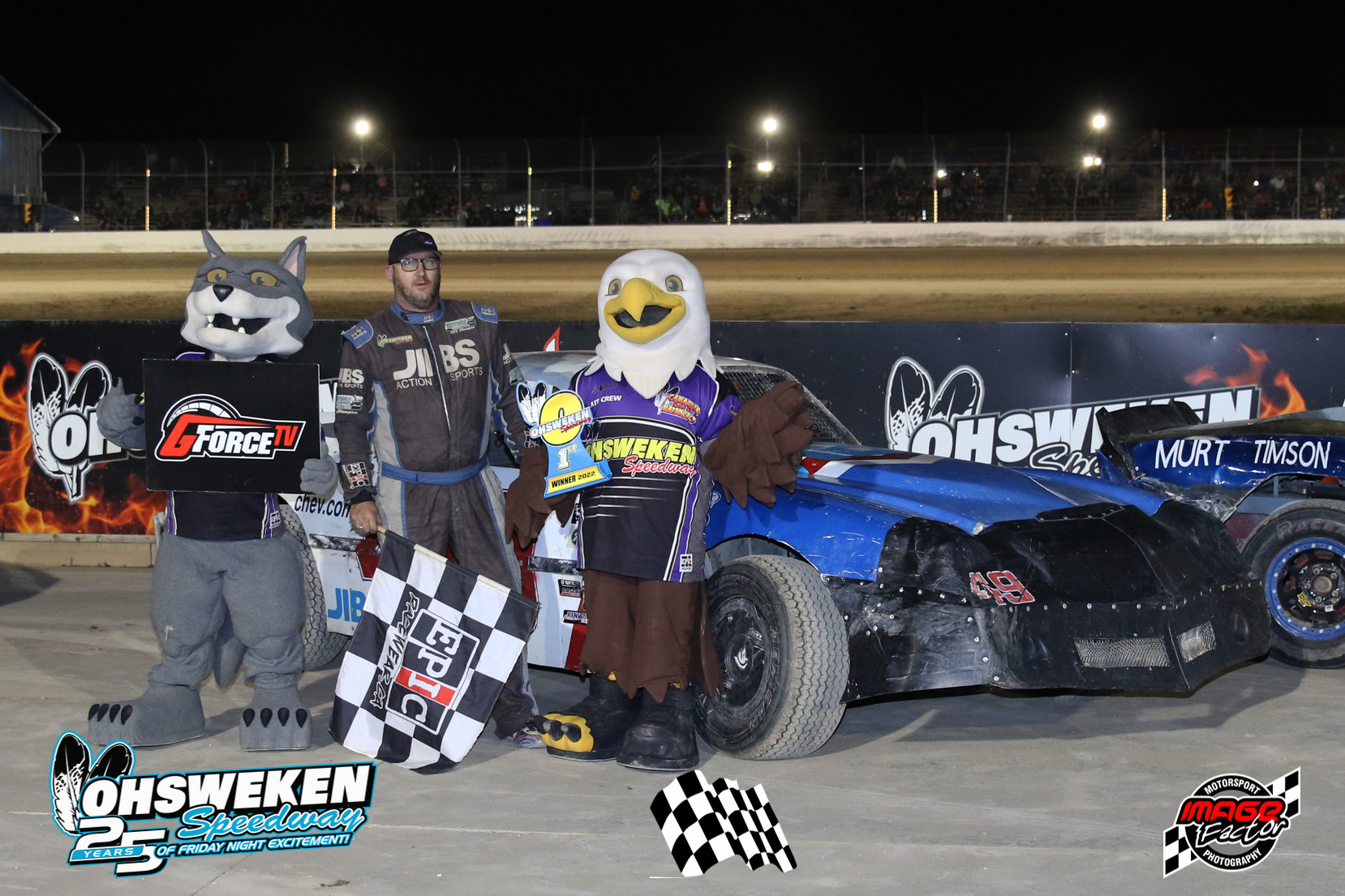 DeBoer settled for second, while Beagle took the final spot on the podium in third. Rounding out the top five was Ron Loggie in fourth, and Kyle Wert in fifth. Bailey left the night leading the championship fight over Beagle by 44 points.