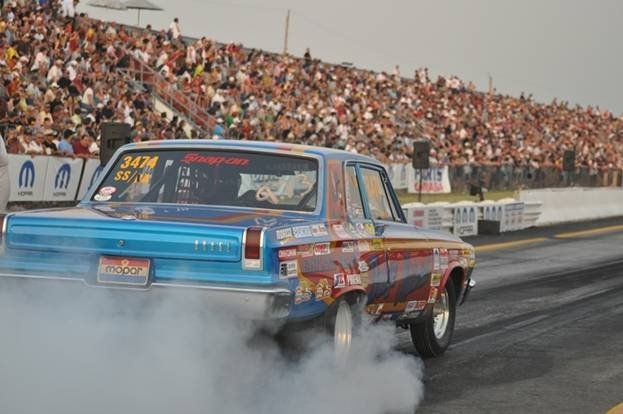 NORWALK, Ohio (December 16, 2011) – After another successful year of racing on the Nitro Jam tour, Feld Motor Sports and the International Hot Rod Association (IHRA) are pleased to announce an exciting 2012 schedule that includes stops at many of the most fan-friendly motorsports facilities in the country.

Beginning on the west coast for the first time ever, the 2012 Nitro Jam schedule will take America’s premier drag racing entertainment show from the deserts of Arizona to the hills of Michigan and everywhere in between on an eight-event tour of North America.

Nitro Jam will be returning to San Antonio in 2012, one of the most popular stops on the tour

“Over the past two years we have taken Nitro Jam from an event struggling to find an identity to one of the most exciting shows in the country,” said Nitro Jam President Aaron Polburn. “We have a very strong schedule for 2012 that is designed to build off of the momentum of last year. We had a very successful year in 2011 traveling to some exciting new markets and we are thrilled to be returning to many of those same locations while continuing the success at many of our other top facilities.”

In addition to an exciting schedule, the 2012 Nitro Jam lineup will continue in the tradition of providing high-speed, nitro-powered drag racing action featuring everything from Pro Fuel Dragsters and Prostalgia™ Nitro Funny Cars to Nitro Harleys, Fuel Altereds and more. The entertainment portion of the evening will once again include a performance by the legendary Grave Digger monster truck and many of the top exhibition acts in the country.

“Last year was all about putting more variety into the schedule and we hope to continue that trend again this year,” Polburn said. “Each event will have a unique menu of nitro classes and exhibition acts, but all will feature the same excitement and ‘I can’t believe I just saw that’ action that fans have come to expect from Nitro Jam.”

Nitro Jam will also keep its “race only” format for professional classes while continuing to feature and grow sportsman competition through new and exciting programs. Professional categories will also continue to have invitation only fields with a new Nitro Jam champion being named at the conclusion of each day of racing.

Check back with NitroJam.com throughout the year for a full lineup of professional and sportsman classes and exciting extras at all Nitro Jam events in 2012.

Kicking off the 2012 Nitro Jam season will be a stop in Tucson, Ariz. in late March at one of the most unique stops on the tour.

Southwestern International Raceway will host the season opener for the first time ever the weekend of March 23-24 with an event featuring one of the biggest funny car races of the season.

SIR will be followed by a trip to San Antonio Raceway in Texas the weekend of March 30-April 1. After last year’s event broke attendance records, Nitro Jam is thrilled to be returning to this incredible facility for another Texas-sized show in 2012.

Following the event in Texas, the Nitro Jam series will head to one of the most unique races on the schedule at State Capitol Raceway in Baton Rouge, La. Featuring the party atmosphere of Mardi Gras, this event always draws a crowd as the series returns the weekend of May 4-6.

In July the Nitro Jam series will shift to the Canadian portion of the tour with stops at the two biggest events of the year at Castrol Raceway in Edmonton, Alb. and Grand Bend Motorplex in Grand Bend, Ont. Nitro Jam will venture to Edmonton for the only three-day Nitro Jam the weekend of July 6-8, followed by a trip to Grand Bend July 21-22 to wrap up the Canadian schedule.

The 2012 Nitro Jam series will wrap up championships for the professional categories at the most spectacular facility on the Nitro Jam tour at U.S. 131 Motorsports Park in Martin, Mich. the weekend of August 10-11.

In addition to a thrilling professional show, sportsman racing will also be featured at all of the Nitro Jam events on the schedule culminating with the sportsman-only IHRA World Finals at Memphis International Raceway in October. More details coming soon at IHRA.com.

For more information on the 2012 Nitro Jam series and a complete listing of events, visit www.nitrojam.com.

Bryan Watts Looks to ‘Brake’ Away From the Pack