Daytona Test Day #3: The pack is back 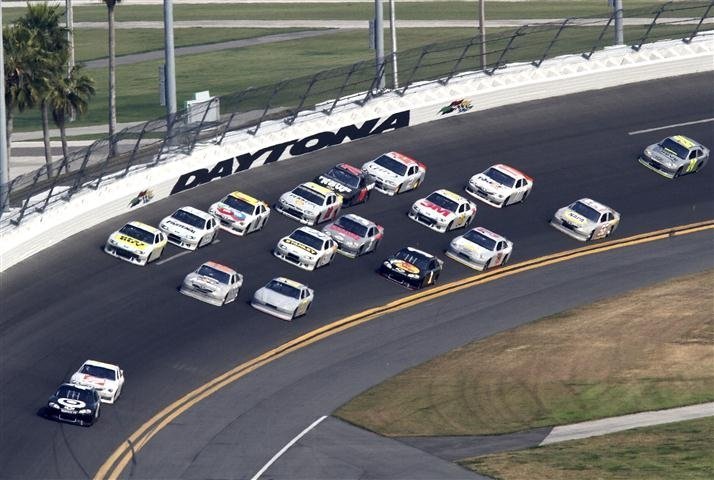 DAYTONA BEACH, FL – As the final day of Preseason Thunder wrapped on Saturday, there was certainly no shortage of information NASCAR and the teams gathered during this three-day test as speeds continued to stand close to the 200-mph mark.

Kasey Kahne led the morning session with a speed of 201.545 mph, with Hendrick Motorsports teammates Jeff Gordon, Dale Earnhardt, Jr. and Jimmie Johnson also posting times near the top of the charts.

Teams continued to collaborate with NASCAR throughout the day, in particular with the afternoon pack drafting session, to work towards the goal of reducing the ease of the tandem draft and making it an exception instead of the norm.

“Once we leave here, obviously there will be a lot of energy spent on looking through all of the data that we’ve collected this week,” said NASCAR Sprint Cup Series Director John Darby. “Looking through lap times and speeds and watching film and footage. I would like to have the final rules package out as quickly as we can just to make sure the teams have enough time to react to everything.”

Drivers and crew chiefs have been very positive regarding the test, the sharing of information and the adjustments being made by NASCAR.

“They’re (NASCAR) definitely thinking ahead and doing a lot of research and development back at their shop,” said 2011 NASCAR Sprint Cup Series champion crew chief Darian Grubb. “Just coming here with a pre-planned effort with some of the changes and things that they’ve already done has been a real positive. They’ve got the data being collected and have a good idea of what they want to do and what they want to accomplish. As they filter that out to us, we go out and hit the race track with it and see how that changes our cars.”

“AJ [Allmendinger] and I were able to log a lot of laps today and I feel good about our package for the 500,” said Penske Racing driver Brad Keselowski. “It’s getting harder to perform the two-car draft so maybe we’ll see some pack racing when we come back. I had a blast running in the pack today.”

The afternoon session kicked off with pack drafting for most teams. Top speed of the afternoon was 200.562 mph, posted by Jeff Gordon.

NASCAR officials were also pleased with the test and will be taking this data back to the Research and Development Center in Concord, N.C. to assist in getting the final rules package together for next month’s Daytona 500.

“We’ve had a good test and gained a lot of information,” said Vice President of Competition Robin Pemberton. “We know that when we come out of here, there will be some loose ends we have to tie up as we get all of our information together and come up with our final plans for Speedweeks. I can say that all in all everything is going according to plan.”