BOWMANVILLE, ON – Nothing goes better with a long, summer weekend than a Coke. Except for stock car racing, that is. Last Saturday night at Canadian Tire Motorsport Park Speedway, Coca-Cola, the official soft drink of the oval, presented a full card of motorsport entertainment featuring the homegrown Late Models, the Bob’s Towing Thunder Cars, and the Lucas Oil Pure Stocks. As an added attraction, the Lucas Oil Canadian Vintage Modifieds came to visit, making their second appearance of the season on the half-mile track.

Taking advantage of his pole position, Jeff Vande Belt in his #33 Attention to Detail Acura launched into the early lead with Corey Hayward, the victor in both of the night’s heat race preliminaries, tucked in closely behind. By the second lap, Henk Mulders (#45 Vos’ Independent Integra), Willy Howells (#19 Prelude) and Kevin VanderBeek (#54) had joined the fray, the five cars circulating nose-to-tail until lap 16. In a three-wide scramble into the third corner, Howells bravely forced his way to the point, the Sandford Racing Engines/ Snap-On Tools Honda then becoming the target for Hayward and his challenging cohorts.

A lap 19 caution period for a minor spin by Mulders set up a Green/ White/ Checkers finish, but Howells was able to hold on to his leading spot, crossing the stripe side-by-side with Hayward to score his third feature win of the year.

“That’s the best race I’ve ever had,” proclaimed the young Oshawa driver. “It was a clean race; we all gave each other enough room, but nothing more.”

Less than a car length behind Hayward came Vandebelt in his #33 Integra chased to the stripe by the recovered Mulders and the #37 of Janetville’s Shawn King.

Bob’s Towing Thunder Car
John Baker Jr. continues to roll on towards his fifth track championship, but with the technical balancing of the field, the ‘Big Man’ from Oshawa is having to work for every position.

In the 20-lap, Bob’s Towing Thunder Car feature, pole sitter Anthony DiBello in his #16 DiBello Towing Monte Carlo sprinted into the lead at the drop of the green, but two laps later relinquished the spot to the charging #14 Mayhew Graphics/Benson Auto Parts Nova of Steve Mayhew. Holding off a quickly closing Baker and the #10 Chevy of Dale Wood for a handful of laps, Mayhew finally succumbed to the pressure, ousted from the point by Baker in an out braking maneuver as the trio heading into the first turn. Unfortunately, Wood’s tires could not maintain grip in the scramble, resulting in a lazy spin bringing out the race’s sole yellow flag.

Back under green, and with a clear track in front of him, ‘JBJ’ was able to focus on the job at hand, and powered away, the #63 John Baker’s Auto/Marksman Club Impala taking the lap 20, checkered flag eight car lengths in front of longtime rival Mayhew. Wood made a strong recovery to claim third place, crossing the line a mere car length behind Mayhew. Tom Cormier (#2 Cormier Transport & Storage Trailers Monte Carlo), DiBello, and Ken Huntington (#7 Camaro) rounded out the lead lap finishers. 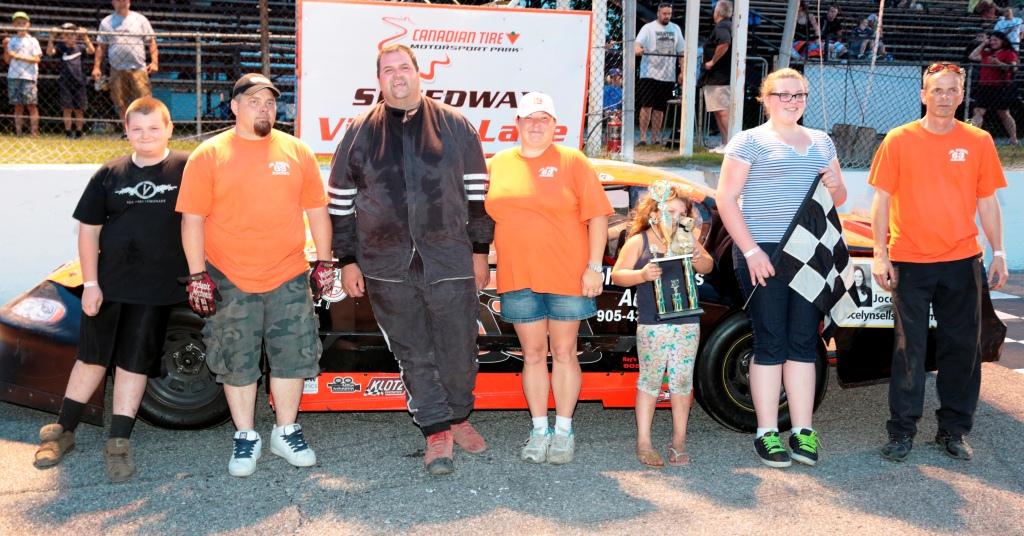 Late Model
Kyle Donaldson is one driver who never needs to be told to ‘Push’, but with a thunderstorm looming, he and his late model compatriots went into full ‘hurry’ mode last Saturday.

Taking the green flag from the middle of the 12-car late model pack, by lap five ‘Wheely’ had worked his way to the front, and used the long, outside line through Turn 3 to snatch the lead away from pole sitter Bob Kish (#78 Rapid Racing). Pulling out an ever-increasing gap over challengers Dwight Brown (#12b) and Darren Kearnan (#55 ProTech Exhaust/Harringtons Mobile Mechanics), Donaldson found his advantage negated when the yellow flag flew for a Turn 4 spin by Shannon Kimmerly.

Back under green flag conditions with eight laps remaining, the #53 Custom Steering/Downtown Rug Impala of Donaldson re-assumed command of the contest, with Kearnan now applying the pressure.

Running in lockstep, Donaldson, Kearnan and Brown completed the 20-lap dash in order, with Kyle holding onto a three car length margin over his rival at the checkers.

“We needed to get as many points as we could after our DNF (did not finish) last week,” said Donaldson. “That was a good race for us. It’s fun to run against guys who race you hard and clean.”

With an evening sweep of the night’s Late Model races, Donaldson now moves within three points in the overall point standings from Kearnan, this night’s feature race runner-up. 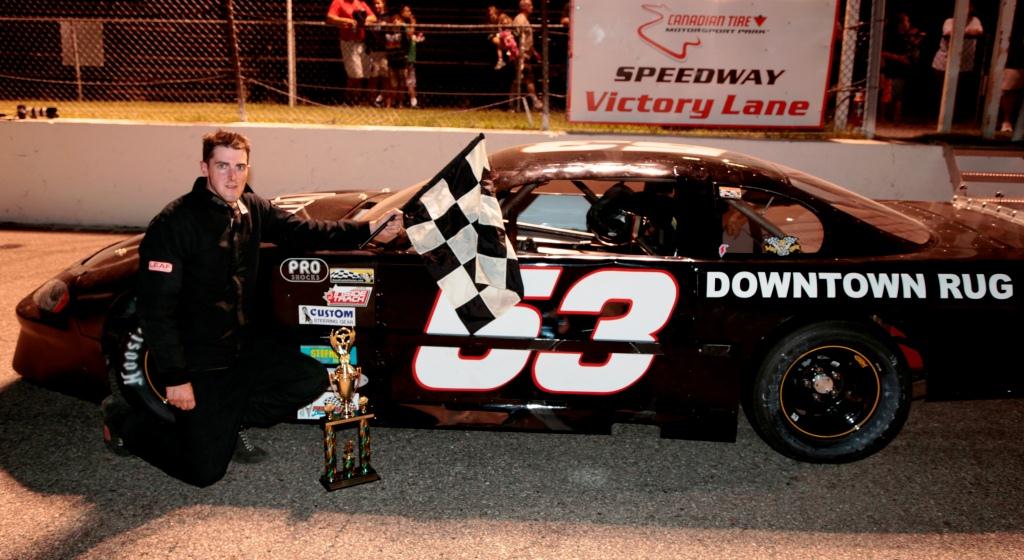 Lucas Oil Canadian Vintage Modifieds
Sixteen of the classic hobby cars took the green flag with the #50 of Joe Atkinson grabbing the lead from the outside of the front row. Immediately pressured by the #5 of former Speedway race winner Mike Podd, Atkinson was shouldered aside in Turn 1, Podd grabbing top spot on lap five.

With five-to-go, Shaw suddenly slowed and headed into the pits, leaving Podd to face the challenges from Keen and June’s Speedway victor Adrian Donkers (#6).

Taking the white, last lap flag nose-to-tail, Keen then surged forward, going door handle-to-door handle with Podd as the pair entered Turn 1, and emerging with the race lead, scored his first feature win of the 2012 campaign. 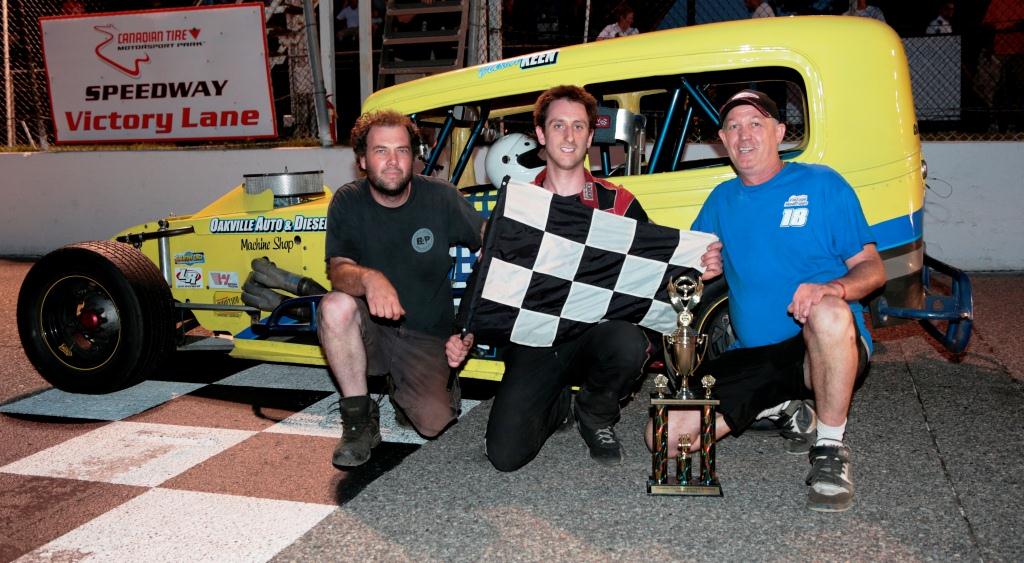 Post-race, Keen admitted that this win had not come easily.

“We had to change the gearing during practice, and we still didn’t like what we had. So we made another gear change after practice and got the car really pulling down the straights,” explained the two-time, and defending, series champion. “This car always handles well, I could drive it hard into the corners, and with the proper gearing, I could get the launch I needed coming out.”

Podd stayed close to the leader but was forced to settle for second place. In a two car sprint to the stripe, Donkers claimed the final podium position over Corey Jones (#82) with Chris Milwain (#21) rounding out the top five finishers.