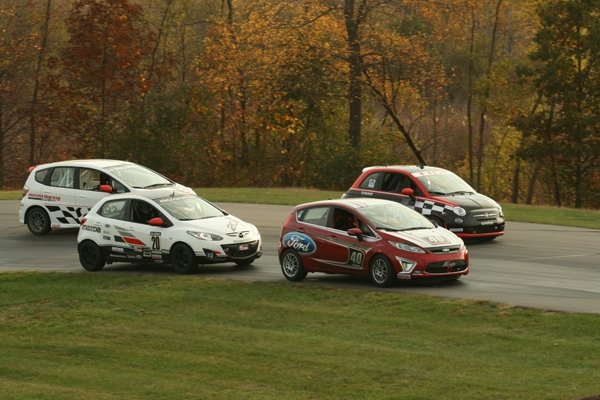 The concept of B-Spec was first developed through collaboration between Honda Performance Development and Mazdaspeed Motorsports Development with the goal of creating a common set of rules that could be adopted by different racing series or sanctioning organizations. Over the past year, CTCC worked with SCCA and Grand-Am to solidify a set of rules that would respect both the B-Spec concept and goals of the different series. B-Spec is designed to be an entry level and affordable category, and highlights one of the fastest-growing segments of the automobile business. Both Honda and Mazda revealed their new prototypes in December of 2010. Since then the Honda Fit and Mazda2 have been joined by the Ford Fiesta and Fiat 500 at various test sessions. Other eligible cars include the Chevrolet Sonic, Kia Rio, Mini Cooper, Nissan Versa and Toyota Yaris.

Like CTCC’s Super and Touring Classes, the new B-Spec Class will have its own set of requirements and will feature showroom stock racing cars utilizing stock engines and chassis, fitted with a competition roll cage, racing seat and other safety equipment along with the approved Continental ExtremeContact race tires and Sunoco race fuel. Weight equalization will be used to balance performance among competing manufacturers.

“This is an exciting new development for CTCC which will provide an entry-level into professional racing in Canada,” stated John Bondar, CTCC President. “I can’t wait to see all of the new competitors on some of the most challenging tracks in Canada. I am proud to confirm that B-Spec will be included in all Rounds of the 2012 CTCC season.”

About CTCC: The Castrol Canadian Touring Car Championship presented by Continental Tire is the only truly Canadian professional road racing series and it showcases race cars based on their stock street version. The entry-level B-Spec Class introduces a compact car category with stock engine; the Touring Class features cars with minimal modifications, while Super Class machines have powerful and heavily modified engines and advanced aerodynamics. All three classes compete at the same time on the track and challenge for supremacy in their class. Experience the rush of touring car racing!