Steve Murdock and Darren Dryden earned front row starting spots for the 30 lap Crate Sprint Car A-Main, and Dryden led the first lap before Mike Bowman slipped past on lap three. Bowman’s pass was negated, however, by a yellow flag for the stopped car of Tyler Ward on the frontstretch. Several drivers made significant gains in the first two laps, including Curtis Gartly who had picked up nine spots.

Dryden kept the lead on the restart, but the race came to a halt when Matt Billings flipped on the frontstretch with three laps complete. Bowman again looked poised to make a pass for the lead after the restart, but a melee ensued when Eric Gledhill and Gartly got together and brought out the yellow flag; Gartly and Brian Nanticoke got the worst of the exchange and were done for the night.

Dryden, Bowman, Jesse Costa, Murdock, and Dale Curran made up the top five for the next restart, and Bowman again went to work in an effort to take the lead from Dryden. While the leaders raced, AST points leader Jacob Dykstra moved back into the top five, passing both Curran and Murdock in quick succession. Dryden, Bowman, and Costa raced close together over the next few laps, with Dryden running the low groove and Bowman up high. Bowman then dove low on Dryden in turn one with eight laps complete, but couldn’t make the move stick.

The leaders caught the tail end of the field with nine laps complete, and Dykstra was able to move past Costa into third as the two negotiated traffic. Dryden briefly opened a gap, but Bowman and Dykstra ran him down again. A joust for second was cut short when Lucas Smith spun off the track in turn four to bring out another yellow flag with 14 laps complete. The yellow was a reprieve for AST championship contender Mathieu Bardier, who had just gone a lap down.

Bowman yet again went after Dryden on the restart, only to see the red flag come out again for a hard Tyeller Powless flip in turn three. Bowman continued to challenge Dryden for the lead when the race restarted, using the outside line while Dryden stayed in the middle of the track and kept Bowman at bay. Murdock re-entered the top three at this point, getting around Dykstra before another yellow appeared for Seth Roy. Murdock then drove around the outside of Bowman on the restart, only to see that move negated when Eric Gledhill spun and collected Adrian Stahle.

Bowman finally got past Dryden after the next restart, but Dryden stayed close behind as the two raced through traffic. Bowman stayed ahead though, leading the final nine laps through one more restart to collect the win and write his name in the record books. Given the choice between $5,000 or a brand new crate engine in victory lane, Bowman chose the engine and left the cash for Saturday night’s winner.

Dryden fought Murdock off to take the runner-up spot, with Murdock taking the final podium spot. Dykstra crossed the line in fourth but came up a few pounds light at the scales and was disqualified. Costa and Curran got credit for fourth and fifth as a result, while Lee Ladouceur, Allan Downey, Darrell Pelletier, Sheldon Bender, and Johnny Miller rounded out the top ten.

Jordan Thomas and Liam Martin drew front row starting spots for the 25 lap 360 Sprint Car A-Main, and traded several slide jobs when the green flag appeared. Martin eventually settled in to the lead, but Thomas chased him back down as the two raced through traffic.

Martin and Thomas both searched the track and sometimes slid high while trying to get through the slower cars; Thomas eventually dove low on Martin in turn three to take the lead with 15 laps complete.

Thomas drove away to claim the win in the race which went green-to-checkered in less than six and a half minutes. Martin settled for the runner-up spot, followed by Josh Hansen, Chuck Hebing, and row seven starter Paulie Colagiovanni. 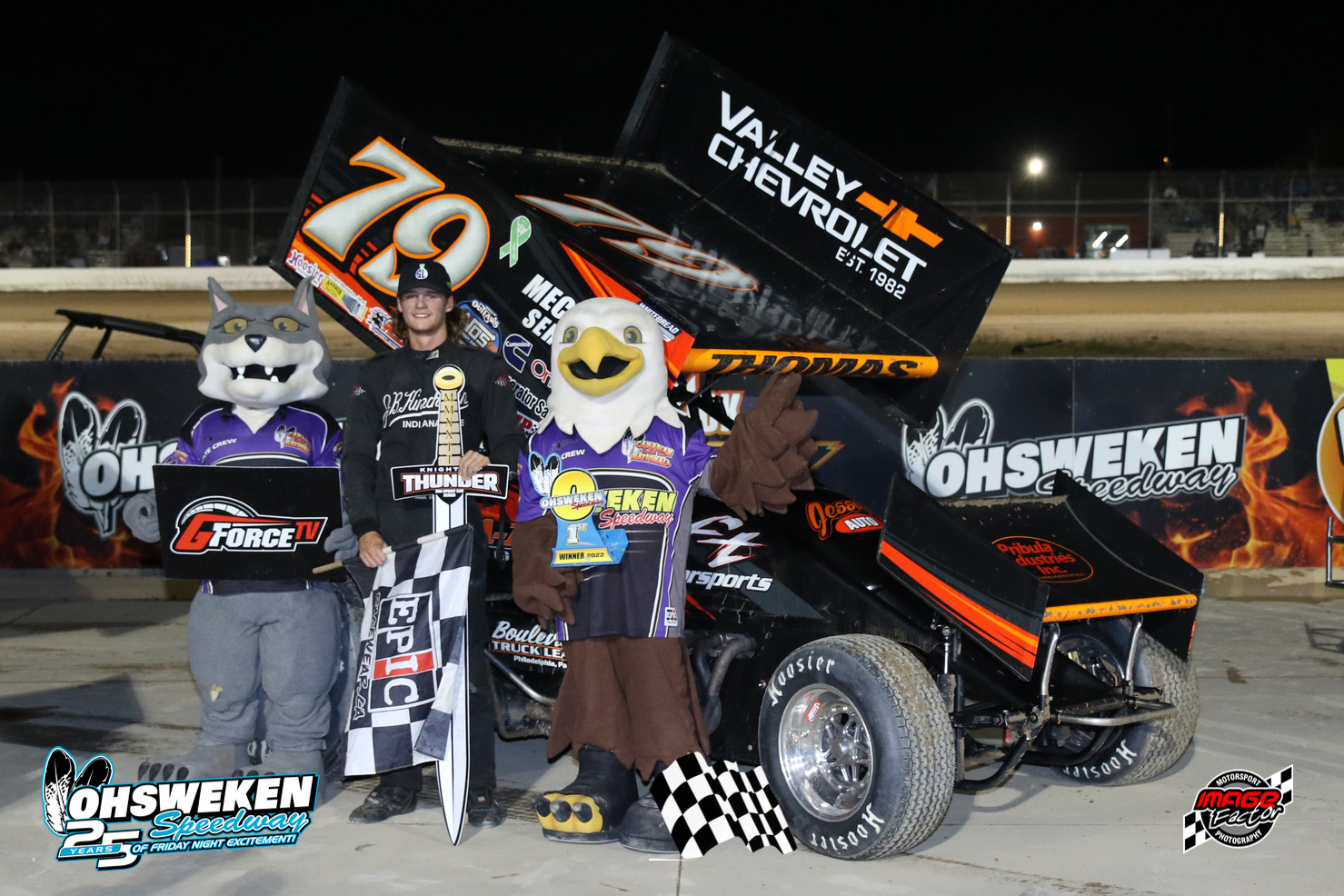